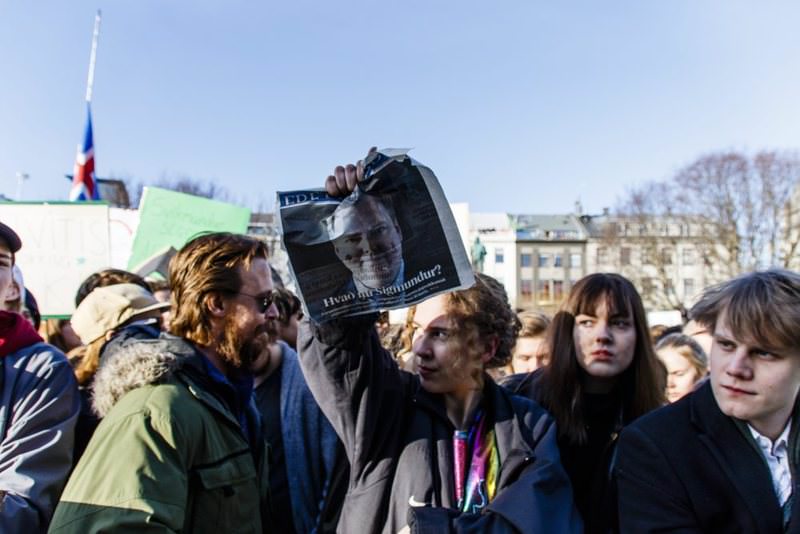 People at a protest in Austurvollur Square in front of Iceland's parliament building in Reykjavic on April 4.
by Daily Sabah with AFP Apr 06, 2016 12:00 am

After a leak of confidential documents, which allegedly reveal how the world's rich use tax havens to hide their wealth, many countries launched probes into the claims. The Kremlin said the action has been taken to destabilize Russia while China said it targets non-Western countries

Several countries have launched tax evasion probes after a massive leak of confidential documents lifted the lid on the murky offshore financial dealings of a slew of politicians and celebrities.

The scandal erupted on Sunday when media groups began revealing the results of a year-long investigation into a trove of 11.5 million documents from the Panamanian law firm Mossack Fonseca, which specializes in creating offshore shell companies. Among those named in the "Panama Papers" are close associates of Russian President Vladimir Putin, relatives of Chinese leader Xi Jinping and Iceland's Prime Minister Sigmundur David Gunnlaugsson, as well as Barcelona striker Lionel Messi.

Offshore financial dealings are not illegal in themselves but may be used to hide assets from tax authorities, launder the proceeds of criminal activities or conceal misappropriated or politically inconvenient wealth.

The first revelations elicited a chorus of denials, including from the Kremlin, which suggested a U.S. plot after the leaks put a close friend of Putin's at the top of an offshore empire worth more than $2 billion. A virtuoso concert cellist, who calls Putin a "brother," Sergei Roldugin, 64, has flown under the radar while other close friends of the Russian leader openly amassed vast fortunes.

"Putin, Russia, our country, our stability and the upcoming elections are the main target, specifically to destabilize the situation," said a Kremlin spokesman, claiming the journalists were former officers from the U.S. state department, the CIA and special services.

In Iceland's capital Reykjavik, thousands took to the streets late Monday to demand the premier resign over allegations that he and his wife used an offshore firm to hide millions of dollars of investments.

Australia has already launched a probe into 800 wealthy Mossack Fonseca clients. France and the Netherlands also announced investigations, while a judicial source said Spain had opened a money-laundering investigation into the law firm.

Panama also pledged to launch an investigation to identify if any crimes have been committed and any financial damages should be awarded. President Juan Carlos Varela said Panama would cooperate with the international probes but also vowed to "defend the image of our country," which has a reputation as a hub for under-the-table dealings.

Among other key allegations of the probe, there are about 140 political figures, including 12 current or former heads of state. The families of some of China's top brass - including President Xi - used offshore tax havens to conceal their fortunes, including at least eight current or former members of the ruling Communist Party's most powerful body.

The papers, from around 214,000 offshore entities covering almost 40 years, also name the president of Ukraine and the king of Saudi Arabia.

Ukrainian President Petro Poroshenko denied any wrongdoing, but he may face an attempt to impeach him. French newspaper Le Monde cited documents showing that Syria used Mossack Fonseca to create shell companies to help it break international sanctions and fund its war effort.

One of the Panama law firm's founders, Ramon Fonseca, told AFP the leaks were "a crime, a felony" and "an attack on Panama." More than 500 banks, their subsidiaries and branches have worked with Mossack Fonseca since the 1970s to help clients manage offshore companies. UBS set up more than 1,100 and HSBC and its affiliates created more than 2,300.

The project, which included a team of more than 370 journalists from more than 70 countries, is believed to be the largest leak journalists have ever worked with. It contains 2.6 terabytes of data, 11.5 millions documents, and 214,000 shell companies.
RELATED TOPICS