Panama leaks continue to get prominent leaders in trouble 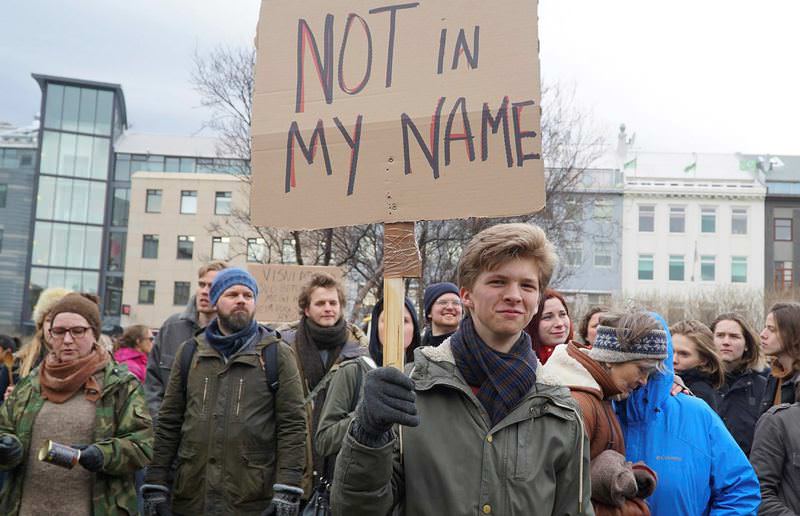 People protest against the prime minister in front of the parliament building in Reykjavik, Iceland.
by Compiled from Wire Services Apr 07, 2016 12:00 am

Iceland's government sought to avoid early elections on Wednesday by picking a replacement for the prime minister who stepped aside over links to an offshore company, as the "Panama Papers" leaks cast the tiny country into a political maelstrom. Sigmundur David Gunnlaugsson exited on Tuesday after leaked documents from a Panamanian law firm showed his wife owned millions of dollars-worth of previously undisclosed shares in a company that held debt from failed Icelandic banks. Picking a new prime minister could allow the ruling coalition to remain in power, but the opposition is trying to force a new election with a vote of no confidence in the government, which could lead to a radical political shift. Polls show the anti-establishment Pirate Party in the lead if a new election is called in the country of 330,000 people, a result with potentially wider impact across Europe where mainstream political parties are fending off populists from both the left and right.

The Panama documents revealed that Gunnlaugsson's wife owned a previously undisclosed firm with claims on the island's collapsed banks. His opponents say that represents a conflict of interest because the government is playing a central role in negotiating the value of such claims. More than 10,000 people showed up earlier in the week to demand Gunnlaugsson's resignation, although protests dwindled late on Tuesday. Iceland has struggled to recover from the 2008 collapse of its highly indebted banks, which led to popular protests, the fall of a government and the jailing of many bankers. The ruling Progressive Party's deputy leader, Sigurdur Ingi Johannsson, said on Tuesday his party had proposed to its junior coalition partner, the Independence Party, that he become the new prime minister. That requires a formal decision by the government, which was expected to meet later on Wednesday. However, there were signs that a transition would not be smooth. A statement emailed on Tuesday night by government spokesman Sigurdur Jonsson said Gunnlaugsson had suggested that Johannsson take over as prime minister "for an unspecified amount of time". "The prime minister has not resigned and will continue to serve as chairman of the Progressive Party," it said. Hundreds of protesters organized demonstrations against the prime minister and asked for an open probe.

One day after the prime minister of Iceland resigned, the president of Ukraine defended himself yesterday. President Petro Poroshenko said at a news conference in Tokyo that his case is significantly different than others in the so-called Panama Papers, including those in Iceland and Russia, where friends of President Vladimir Putin have been named. An offshore holding company set up for his candy business was necessary to put his assets into a blind trust when he became president in 2014, Porshenko said. "This is absolutely normal procedure, and I think this is the main difference from the naming of all the political figures in this Panama list," he said. Asked why he had failed to fulfill a campaign promise to sell his business if elected, Porshenko said there are no buyers for assets in a country "in a state of war." He said he was open to an investigation. "If we have anything to be investigated, I am happy to do that," he said. "But, this is absolutely transparent from the very beginning. No hidden account, no associated management, no nothing."

Prime Minister David Cameron, his wife and their children will not benefit in future from any offshore funds or trusts, a spokesman said on Wednesday as the British leader faced more questions over family tax affairs. Cameron's late father, Ian, was among the tens of thousands of people named in the leaked documents. After having at first described it as a private matter, Cameron's office said on Tuesday that he and his family did not benefit from any such funds at present. Cameron also said he did not own any shares or have any offshore funds. But his failure to say whether he or his family would benefit in future only intensified media speculation, with the story splashed across many newspaper front pages on Wednesday. "There are no offshore funds or trusts which the prime minister, Mrs Cameron or their children will benefit from in future," a spokesman for Cameron said on Wednesday.
RELATED TOPICS