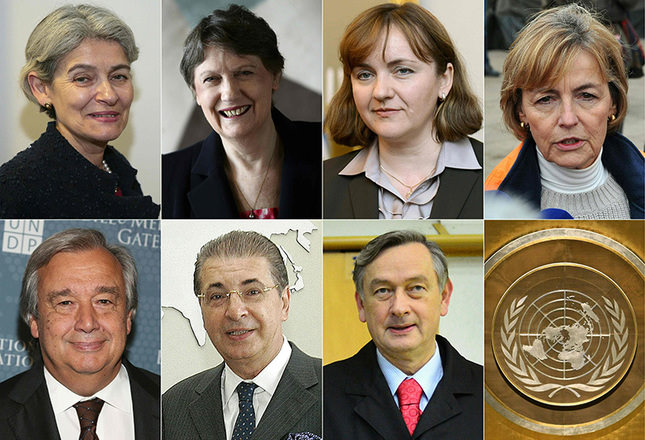 This combination of file pictures created on April 10, 2016 shows (from top left) Bokova, Clark, Gherman, Pusic, Guterres, Kerim and Turk, candidates for the UN secretary-general election, and the United Nations emblem. (AFP Photo)
by Apr 10, 2016 12:00 am

An ex-president, three former prime ministers, several ex-foreign ministers and even a part-time poet are all campaigning to become the next UN secretary-general.

The election later this year may see the first secretary-general hailing from eastern Europe and possibly the first woman in the top post. 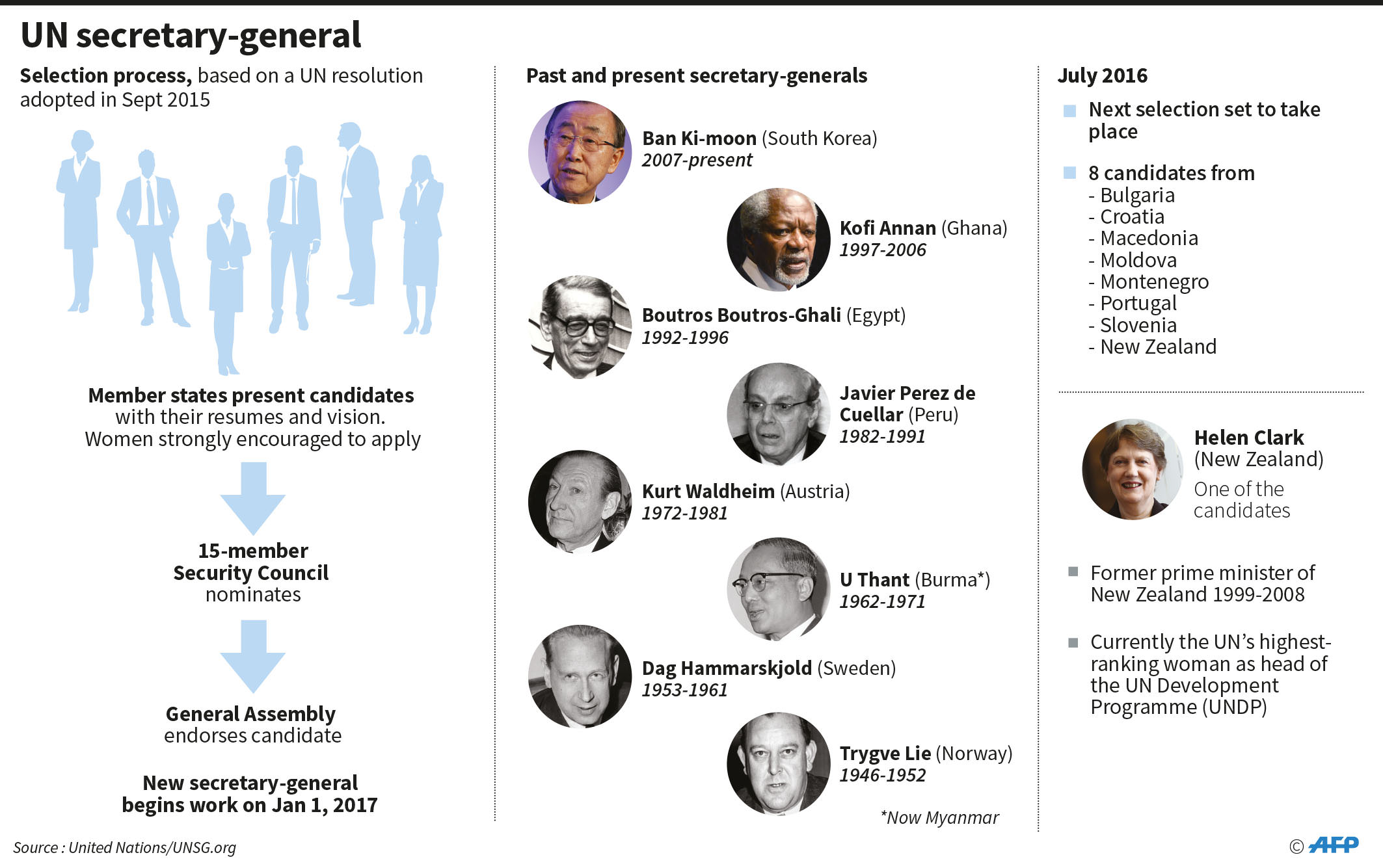 Here's a look at the eight declared candidates so far:

Irina Bokova: The head of the UN cultural agency UNESCO since 2009, Bokova briefly served as Bulgaria's foreign minister from 1996 to 1997 and was also ambassador to France and to Monaco. Considered a strong candidate from eastern Europe, the 63-year-old Bokova is also seen as pro-Russian. Her father was editor of the Bulgarian communist party newspaper during the Soviet era. Her handling of the Palestinian membership in UNESCO in 2011, which led to a cutoff of U.S. funding, ruffled feathers. Bokova speaks English, French, Russian and Spanish.

Helen Clark: The former prime minister of New Zealand has led the U.N. Development Programme since 2009, making her the highest-ranking woman at the United Nations. The 66-year-old former academic is among New Zealand's longest-serving prime ministers, having led the government for three successive terms from 1999 to 2008. Clark's chances remain unclear, with some diplomats describing her as a "pro-Western" candidate who lacks broad support in the UN's global diplomatic community.

Natalia Gherman: The former foreign minister of Moldova led her country's negotiations with the European Union on association and trade. Gherman held the post from 2013 until January this year. The 47-year-old diplomat also served as Moldova's ambassador to Austria and to Sweden, Norway and Finland. The daughter of independent Moldova's first president, Mircea Snegur, Gherman speaks English, Russian and German.

Antonio Guterres: The former U.N. high commissioner for refugees is seen as a strong contender for his handling of Europe's refugee crisis. He was at the helm of UNHCR for 10 years until December 2015, tackling one of the most challenging jobs at the United Nations. The 66-year-old socialist served as prime minister of Portugal from 1995 to 2002. A trained engineer, Guterres is fluent in English, French and Spanish.

Srjgan Kerim: Macedonia's former foreign minister was also the Balkan country's ambassador to the United Nations and served as president of the U.N. General Assembly in 2007 and 2008. Later, he held the post of U.N. envoy for climate change. While he was the first candidate to put forward his name in the race, the 67-year-old is not seen as a heavyweight contender. Kerim speaks nine languages including English, French, German, Spanish and Italian.

Igor Luksic: Montenegro's foreign minister since 2012, Luksic also served as prime minister and finance minister. At age 39, he is the youngest contender in the race to be secretary-general. He has published three books of poetry and prose including "The Book of Fear," translated into Italian and French. Fluent in English, Luksic also speaks Italian, French and German.

Vesna Pusic: As foreign minister, a post she held for five years until January, the 62-year-old Croatian oversaw her country's entry into the European Union in 2013. A sociologist, Pusic has been outspoken about gender equality and LGBT rights. She is fluent in English and German.

Danilo Turk: Slovenia's former president was also the country's first U.N. ambassador in 1992. After his posting as Ljubljana's envoy, he was appointed U.N. assistant secretary-general for political affairs, a post he held until 2005 before returning to Slovenia, where he taught law. Returning to politics, he was elected president in 2007 and held the post until 2012, when he went back to teaching law studies. He is considered one of the most experienced candidates. Speaks French, English, German and Serbo-Croat.