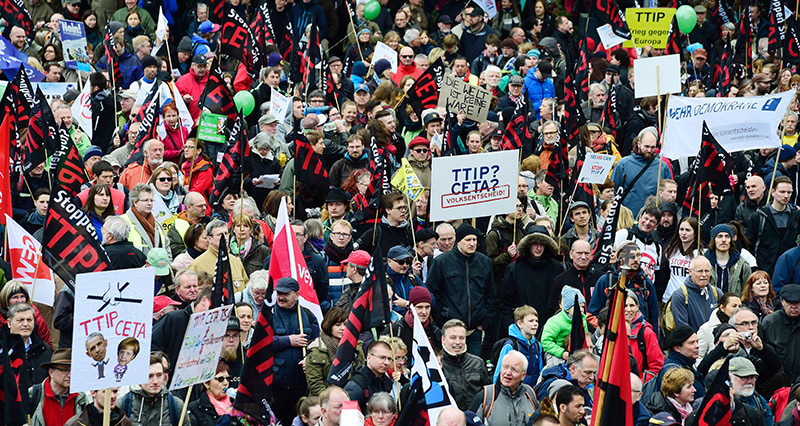 President Barack Obama hopes to build momentum during a two-day visit to Germany to help push a trans-Atlantic trade deal between the U.S. and Europe over the finish line. He knows a tough sell awaits him, particularly in Germany where the opposition is fierce.

Other issues will be on the table when Obama and German Chancellor Angela Merkel meet Sunday for talks, chiefly efforts to counter the Daesh terror group, improve cooperation on counterterrorism measures, and encourage countries to share law enforcement information. Daesh says it was responsible for attacks that killed 30 people in Brussels last month.

Obama also wants to give Merkel a public pat on the back for her "courageous" handling of the migrant issue. Her decision to allow the resettlement in her country of hundreds of thousands of people fleeing violence in Syria and other Middle Eastern conflict zones caused an angry domestic backlash.

Merkel recently helped European countries negotiate a deal with Turkey to help stem the migrant flow, but she and the other leaders are now being pressured to revisit.

The Trans-Atlantic Trade and Investment Partnership, or TTIP, was a main factor behind what likely is Obama's final stop in Germany before he leaves office in January. He's joining her at the Hannover Messe, the world's largest industrial technology trade fair, to try to build momentum for the agreement.

Opposition to the deal is strong in Germany. Thousands swarmed the streets Saturday in the central German city of Hannover, on the eve of Obama's arrival there, to protest the deal. Some carried placards that said "Yes We Can — Stop TTIP!" It was a riff on Obama's 2008 presidential campaign slogan.

More than 100,000 people protested against the proposed pact in Berlin in November.

Proponents argue that the agreement would boost business at a time of global economic uncertainty. Critics fear the erosion of consumer protections and environmental standards.

Negotiators in Washington and Europe are trying to finalize key parts of the deal before the end of the year, after which Obama's successor and election campaigns in major European countries could further complicate the already difficult negotiations.

Obama argued for the pact during an appearance Saturday in London, while acknowledging the tough work that's needed to complete it.

Despite "enormous amounts of trade" between the U.S. and Europe, "there's still barriers that exist that prevent businesses and individuals that are providing services to each other to be able to be able to do so seamlessly," he said. The pact will bring millions of jobs and billions of dollars in benefits to both sides of the Atlantic, Obama said.

Negotiating trade deals "is tough," Obama said, because each country fights for its own parochial interests.

Merkel is the world leader Obama has worked with throughout his two terms, in times both good and bad, and he plans to use the visit to show political solidarity with her, particularly on the migrant issue. Her approach to the crisis, which dented her popularity at home, "has been courageous," he said.

Merkel and top European officials traveled near the Turkish border on Saturday to promote the EU-Turkey migrant deal.

"She's demonstrated real political and moral leadership," Obama told the German daily Bild in an interview published Saturday. "The politics around refugees and immigration is hard in any country, but I believe the best leaders are willing to take on the toughest issues, especially when it's not easy."

Obama was likely to contrast Merkel with the Republican presidential candidates who want to block Muslims from entering the U.S.

Obama's first order of business after he arrives in Germany on Sunday is to meet with Merkel. Obama will also help her open the trade show before they dine with U.S. and German business leaders who are participating in the fair. Some 300 U.S. companies are among the expected participants.

On Monday, Obama plans to join Merkel to tour the show. He'll also give a speech addressing the challenges facing the United States and Europe.

Merkel also used the occasion of Obama's visit to invite the leaders of France, Britain and Italy to Hannover on Monday for a five-way meeting where they are expected to discuss Syria, Libya, the Daesh terror group, migration and other issues.