Arrests in Seattle, clashes in Paris on Labor Day 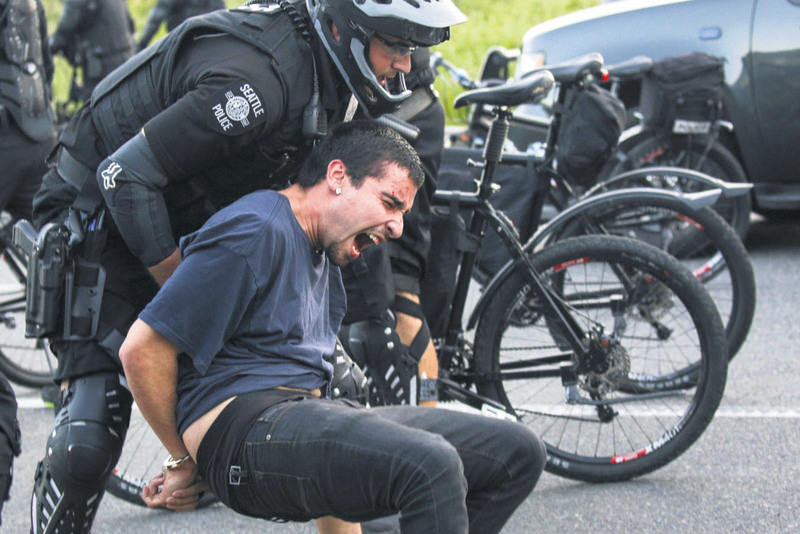 by Compiled from Wire Services May 03, 2016 12:00 am
Seattle police used pepper spray to disperse protesters that authorities say threw rocks, flares, bricks and Molotov cocktails at officers during a rowdy May Day gathering.

At least nine people were arrested Sunday evening. Authorities said five officers were hurt, none seriously. The clashes in Seattle, Washington, followed a peaceful march in the city earlier in the day by advocates for workers and immigrants, just one of several events in cities nationwide last Sunday to call for better wages for workers, an end to deportations and support for an Obama administration plan to give work permits to immigrants in the country illegally whose children are American citizens.

In Seattle, dozens of people dressed in black had gathered at a downtown park following the earlier, peaceful march. The anti-capitalist demonstrators, who did not have a permit from city officials, then started marching through the streets. "Unfortunately, tonight we had some violence," said Seattle Police Chief Kathleen O'Toole. Authorities said eight males and one juvenile female were arrested Sunday evening.

Also, social justice advocates in Durham, New Hampshire, made the rejection of racism, xenophobia and anti-Muslim sentiment the themes of their annual rally.

Meanwhile, thousands of people gathered in Paris' Place de la Bastille square on May Day. Police used tear gas to push back demonstrators in some parts of the French capital. Trade unions, teenagers, pensioners and families held nearly 300 largely peaceful marches Sunday in Paris and cities around the country. The traditional May Day rallies took on greater weight this year as parliament is debating a bill that would allow longer working hours and let companies lay workers off more easily. Clashes between police and protesters also erupted in the French cities of Nantes, Lyon, Marseille and Toulouse. The bill has prompted the most violent labor-related protests in a decade, with marches and sit-ins frequently degenerating into clashes with police. Nationwide two people were injured and 18 arrested, according to the Interior Ministry. Marchers held banners calling President Francois Hollande a "traitor."
Last Update: May 03, 2016 1:05 am
RELATED TOPICS