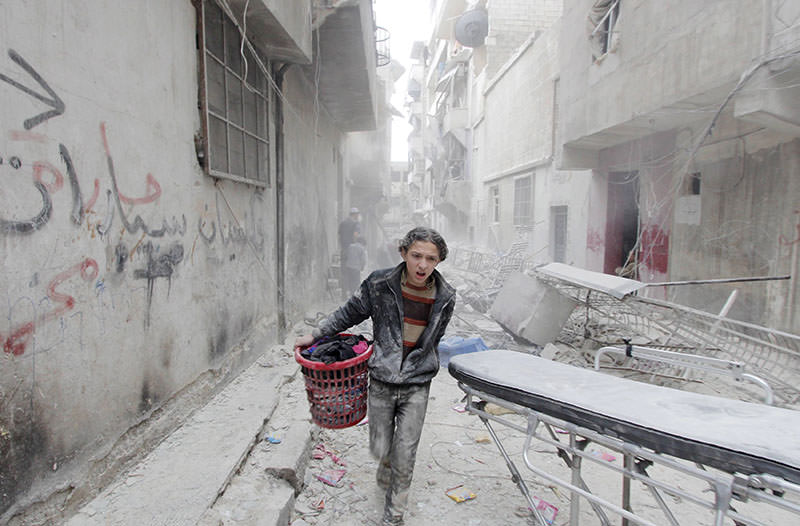 A boy carries his belongings at a site hit by what activists said was a barrel bomb dropped by forces loyal to Bashar al-Assad in Aleppo, April 2, 2015. (Reuters)
by Anadolu Agency May 07, 2016 12:00 am

Many people, including the author of this article, believe that U.S. President Barack Obama does not have a policy towards war-torn Syria. However, the lack of such a policy is actually part of a strategy in the sense that a policy absence is not an absurdity, but rather a plan towards strengthening the Russian and Iranian role in the region and filling the void left by the U.S. withdrawal.

For five years, the Obama administration has consistently said that Bashar Al-Assad has lost his legitimacy. However, no action has been taken against him in this regard.

When the Syrian revolution broke out at the beginning of March 2011, civilians were continuously and publicly killed without any resistance for six months. And when no international action was taken to stop this madness, members of the Syrian Armed Forces started to defect and form the Free Syrian Army in order to defend civilians. At this stage of the crisis, there were as yet no armed radical groups, no Al-Qaeda and certainly no Daesh, a fact that many avoid mentioning even now.

In the period between 2011 and 2013, Washington was looking for excuses to justify its negative attitude toward the Syrian revolution, stressing its intention to avoid staging a military intervention in the country, although none of the Syrians had asked for such a thing at all. All they asked is either to allow the supplying of weapons to them to defend themselves against Assad and his allies, or to prevent the flowing of Iranian, Iraqi, Hezbollah, and Russian support to Assad so that they have fair fight in what would then become "Assad vs. the Revolution".

However, Obama rejected both; he also refused the constant demand to establish a safe zone. Moreover, his administration put pressure on the regional allies not to supply advanced weapons to the rebels, and on some occasions stopped weapon shipments to the Free Syrian Army.

In 2012, Obama had a historic opportunity to make a significant change in Syria and the region, when all the prominent members of his National Security Council (the secretary of defense, the secretary of state, the CIA chief, the joint chief of staff chairman) supported a proposal to arm the Syrian opposition, but once again he rejected his own NSC's suggestion.

Furthermore, at that time, the White House received detailed plans from the CIA with 50 options to remove Assad from power. CIA Director David Petraeus, and other officials who supported the plan, believed that it could have prevented the rise of Daesh, Assad's use of chemical weapons, the European refugee crisis, and the tens of thousands of civilian deaths that have happened since.

It turned out that Obama was mainly interested in appeasing Iran's mullah regime, more than his interest in the freedom of the Syrian people, their revolution, or establishing a democratic system in the country. And because he was afraid to endanger his secret contacts with the Iranian regime, he avoided taking any steps that might anger or instigate any opposition on the Iranian side, including of course support to the Syrian opposition and overthrowing Iran's strategic ally in the region, Bashar Al-Assad.

This was no temporary measure. It was an extension of a policy that was previously put in place. In 2009, the administration ignored the "Green Revolution" in Iran for the sake of keeping in touch with the mullahs' regime, an attitude that encouraged Iran's "Islamic Revolutionary Guard Corps" (IRGC) to brutally suppress thousands of democracy protesters and end the revolution without facing any consequences.

In 2010, the White House reached an understanding with Iran concerning Iraq, which ultimately led to the end of nascent democracy in the country. So instead of respecting the people's choice to name Iyad Allawi -- a national Shiite Iraqi with major Sunni support -- as a prime minister, the U.S.-Iranian understanding brought Nouri Al-Maliki to power, one of the worst dictators in the history of Iraq -- particularly in terms of his sectarian, exclusivist, and divisive policies that gave rise to Daesh.

In 2011, the year the Syrian revolution broke out, secret meetings took place between Iranian representatives and U.S. officials. In line with this, although 2012 witnessed the largest flow of Shia militias led by the IRGC into Syria to support Assad, Obama did nothing. Moreover, he decided to establish secret negotiations with Iran in Oman in 2013.

During all this period, Assad used all kinds of weapons against the Syrian people. Moreover, in August 2013, he challenged the whole world by using chemical weapons against civilians, crossing Obama's "red lines", thus giving him another opportunity to correct his strategic mistakes. But once again, instead of punishing Assad and overthrowing him, he decided to make a chemical deal with Russia.
Senator John McCain, chairman of the Armed Services Committee (SASC), had this to say about the White House's decision: "Not only did it violate every moral obligation we have to prevent mass atrocities and punish the use of chemical weapons, but it also gave a green light to Assad to accelerate his sectarian war against the moderate opposition. Moreover, the president's inaction destroyed U.S. credibility with our Arab partners in the region who had been prepared to support the U.S. mission, and it shook the confidence of America's allies worldwide".

Within one month from that chemical attack, Obama made a phone call to Hassan Rouhani, president of the Islamic Republic of Iran, the first such call since 1979. Following this progress, they reached a deal which was hailed as "historic" at the end of 2013.

As a result, throughout 2014, Iran realized its long-term goals by controlling other countries in the Middle East politically and militarily. For instance, it got to decide the fate of the president in Iraq, brought down Lebanon's president, suspended a president in Yemen, and kept Assad as Syria's president. In other words, Iran controlled all these countries without a single reaction from the U.S. administration in what it appears to be an official recognition of a legitimate Iranian sphere of influence.

After satisfying Iran, the U.S. focused on giving Russia a bigger role in Syria. Russia's direct role in the country started to take shape in the wake of their joint chemical deal, and it became formal at the beginning of 2014 mainly through the Geneva-II Agreement on Syria.

In order to justify all its previous steps, Washington started to talk about its willingness to support the moderate Syrian opposition. But its decision came too late because its negative policies had already allowed Assad to create the perfect environment for the birth and proliferation of extremist groups, mainly after the chemical massacre. Obama made use of this issue in order to defend his inaction against Assad.

At the end of 2014, the U.S. began to support the PYD, the Syrian affiliate of the PKK, which is officially classified as a terrorist group. Furthermore, the U.S. withdrew its battery missiles from the Turkish border, paving the way for the Russian military intervention in Syria with a green light and encouragement supposedly in the name of "fighting terrorism".

The U.S.' policy has aroused the anger of its putative allies in the region, such as Turkey and Saudi Arabia, inasmuch as it harmed their national security interests and further strengthened their enemies on the one hand, while on the other allowing a full destruction of Syria, the killing of hundreds of thousands of civilians, and the displacement of millions.

Since the White House considered the "fight against terrorism" a priority, it continued its insistence on the rejection of various solutions offered by the above-mentioned countries, such as setting up a safe area or arming the moderate opposition with advanced weapons in order to create pressure on Assad to remove him from power, or to create the necessary conditions for his ouster.

The administration believed earlier that a focus on the terrorism issue would help it contain the conflict of interests between Russia and Iran on one side, and Turkey and Saudi Arabia on the other, counting on the idea that when all sides were on the same track, the Assad problem would be circumvented and forgotten.

But what happened next was totally the opposite. Turkey and Saudi Arabia were always insisting that without removing Assad, extremism, sectarianism, terrorism, and the number of refugees would increase, the situation would continue to worsen, and there would be no serious results in the fight against Daesh.

In the middle of 2015, Russian preparations for staging a military intervention in Syria in Assad's favor coincided with the first and second Vienna meetings. These meetings were used in order to provide political legitimacy for Russia's intervention in Syria, stressing the fact that all of the circumstances were aimed at weakening the moderate Syrian opposition, ending the Syrian Revolution, and reinforcing the Assad regime.

At that time, the U.S. administration stressed that Russia would pressure Assad, and Iran would take steps toward withdrawal in order to get everyone around the negotiating table whereas the opposite came true.

During this year's negotiations, Assad was not even forced to comply with international laws and UN Security Council Resolution No. 2254 especially against the deliberate and systematic targeting of civilians and civilian infrastructures by barrel bombs or missiles, the use of starvation weapon against civilians, and the release of thousands of arbitrarily arrested detainees.

At the beginning of March 2016, Obama was quoted as saying in an interview with The Atlantic magazine that he was "very proud" not to have targeted Assad after his chemical massacre. Furthermore, at the end of March, his administration agreed to postpone discussing Assad's future in the coming negotiations.

In conclusion, we can clearly see how the White House has changed its rhetoric in the Syrian crisis from "Assad must leave" in 2011 to "Assad can't disappear suddenly," and later on to "We don't mind if Assad stays for a while," and finally, reaching the current status that emphasizes its decision that "It is the Syrian people that must leave, not Assad!"

*The writer is a foreign affairs expert and senior political advisor