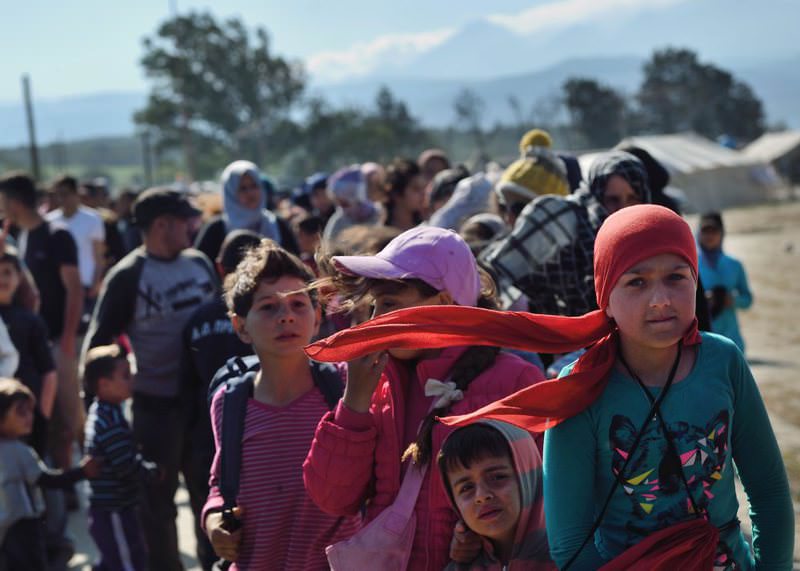 Refugees line up for food at the makeshift camp along the Greek-Macedonian border near the village of Idomeni on April 20.
by Daily Sabah with Wires May 11, 2016 12:00 am

A new U.N. plan aims to resettle at least 10 percent of refugees each year and urges states to share responsibility more fairly. U.N. Secretary-General Ban said he was concerned about xenophobia that has tainted discussions about refugees and called on states to fight bigotry

On Monday, United Nations Secretary-General Ban Ki-moon warned against the increasing trend of xenophobic responses to refugees and urged all member countries to create an agreement which would more fairly share responsibility and care for the world's hundreds of millions of refugees and migrants.

The U.N. hopes that this agreement would lift some of the burden of the refugee crisis which are falling on developing countries, a crisis which has been fueled by the five-year war in Syria as well as chaos in Afghanistan and north and east Africa, and poverty in West Africa.

The global agreement would be accompanied by a U.N.-led campaign to combat the xenophobia and racism that have tainted discussions of the refugees and migrants, U.N. officials said at a briefing to release a report on the global migration.

The proposal calls for resettling at least 10 percent of the global refugee population annually, under a scheme that would be negotiated at the United Nations.

The U.N. estimates 20 million refugees worldwide, and another 40 million internally displaced people. Of these, they estimate 86 percent live in developing countries, often near their originating countries.

Added to those figures are 244 million migrants who live and work in countries where they were not born. The U.N. said the campaign would attempt to counter an increasingly negative attitude and tone in debates over how to deal with the crisis.

"I am concerned at the increasing trend of member states to erect fences and walls," said U.N. Secretary-General Ban Ki-moon. "Xenophobic and racist responses to refugees and migrants seem to be reaching new levels of stridency, frequency and public acceptance."

The proposals come ahead of a summit meeting planned at the U.N. in September to address the global refugee crisis. The U.N.-led campaign will promote such steps as more direct, personal contact between refugees, migrants and people in their host countries, according to Karen Koning AbuZayd, a U.N. special adviser for the summit.

Nations will be called upon to develop plans for offering opportunities for refugees and migrants to receive education, language and skills training and employment. The agreement would require nations to share responsibility in a variety of ways, so that a few nations do not shoulder much of the burden while others do far less, according to the U.N. This might include resettlement policies, financing arrangements, aid to host countries and technical assistance, said AbuZayd. "States will share responsibility for refugees more fairly. Host countries will receive immediate support for their development needs. International migration will be governed better. Statistics overwhelmingly show that refugees and migrants contribute to their hosts, and make a positive impact as soon as you put them to work, which helps not only the host country which took them in, but it helps with the countries back home, too, because of the remittances."

Amnesty International called the plan a potential "game-changer," but said the success of the agreement depends upon nations agreeing on a permanent system for sharing responsibility. "World leaders cannot go on lurching from crisis to crisis, haggling over numbers and fiddling while parts of the world burn."

Citing "refugees in shaky boats, trapped at border fences or crammed into overcrowded camps where hopes and dreams wither," Amnesty said: "Too often, these scenes of despair are borne not just from war and persecution but also of bad, callous policies."

Facilitating safe migration is included among the Sustainable Development Goals, a blueprint of plans for nations to fight poverty, promote equality and slow climate change by 2030. U.N. member nations signed the goals in the fall of 2015.