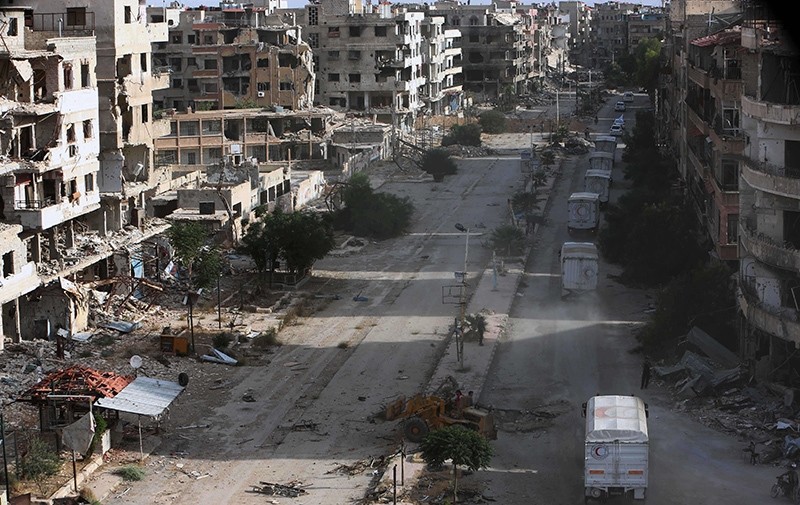 The U.N. envoy for Syria expressed concerns Tuesday about a new trend in the country's five-year war: the Assad regime has allowed humanitarian aid into besieged cities and towns, but those same areas have been shelled either before or after the convoys arrived.

Speaking by videoconference to the U.N. General Assembly plenary in New York, Staffan de Mistura detailed his office's efforts to help shepherd aid to embattled Syrians, bring government and opposition envoys back to peace talks and buck up a fragile cease-fire — all aimed at ending Syria's devastating conflict that has left at least 250,000 dead.

De Mistura noted progress this year in reaching areas that have long been surrounded by fighters, limiting or even halting access to aid shipments from U.N. and other humanitarian and advocacy groups. But authorizations for access from the regime have come with "bad news," he said — violence targeting the same areas that get aid.

"There has been a trend in the last weeks that the very areas where there has been a breakthrough of delivering humanitarian aid to besieged areas have been then shelled, before and after the convoys have reached all the parties," de Mistura said.

De Mistura also detailed his hopes to revive indirect peace talks between regime and opposition representatives. He has convened them three times already this year, but with no progress toward his final aim: a political transition for Syria.

He said a truce between Assad's forces and rebel fighters brokered by the U.S. and Russia is "heavily challenged" in places like Idlib, Latakia and Aleppo, but overall fighting remains less than before it was reached in February.