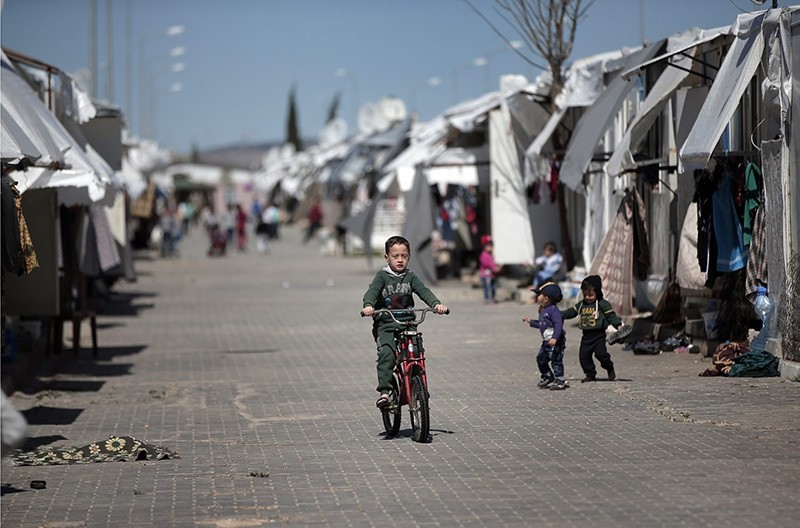 Syrian refugees go about their normal lives at the u00d6ncu00fcpu0131nar camp for Syrian refugees next to the border crossing with Syria, near the town of Kilis in southeastern Turkey, March 17, 2016. (AP Photo)
by daily sabah Jun 23, 2016 12:00 am

With the refugee numbers between 59 and 67.2 million, nations are having an understandably difficult time providing the refugees with what they need. Add to this the constant security threats that most nations face and it makes governments and citizens hesitant to include these refugees into their countries. Many world leaders and politicians have used the security issue to slow down or halt the inflow of refugees.

According to an exclusive article CNN International published on Thursday, architects and designers around the world are working on how to create secure spaces and move past the traditional idea of what buildings are in order to incorporate mobility. The article hopes that architecture will end up playing a role in the redefining of ethical agendas.

The refugee migration through the Mediterranean has caused the deaths of many refugees and has caused many nations and organizations to call for better and more immediate treatment of the refugees.

Make-shift camps are typically created in the nearby areas of borders and are mostly very poorly looked after. The areas offer no real protection to the refugees, there is no true privacy, and resources are scarce. And yet, it is still better than what the refugees are fleeing from.

Former United Nations human rights worker Kilian Kleinschmidt stated in an interview with Dezeen magazine that the average stay at a refugee camp is 17 years.

Regardless of how big or how old a refugee camp might be, they are labeled as impermanent which means that they are provided for by international organizations and governments and therefore have no rights to create autonomous laws or any type of working systems and protections.

At Royal College of Art in London, a group of master's students have attempted to minimize the refugee struggle by designing a coat that can be reformed into a tent or a sleeping bag for an adult and child.

But there are people who have doubts as to the useful of these jackets.

"This garment, while being better than nothing, does not appear suitable for the harsh weather conditions many refugees face. It's certainly not an adequate shelter for an adult and child," Nick Harvey, part of the voluntary health organization Doctors of the World, said to The Guardian.

Better Shelter goes a few steps further by providing secure tents made of steel and semi-hard walls that can be put together in less than a day. Better Shelter has partnered with United Nations High Commissioner for Refugees (UNHCR) and the Ikea Foundation to provide suitable housing for refugees.

Better Shelter was presented at the World Humanitarian Summit held in Istanbul, Turkey earlier in May of this year.