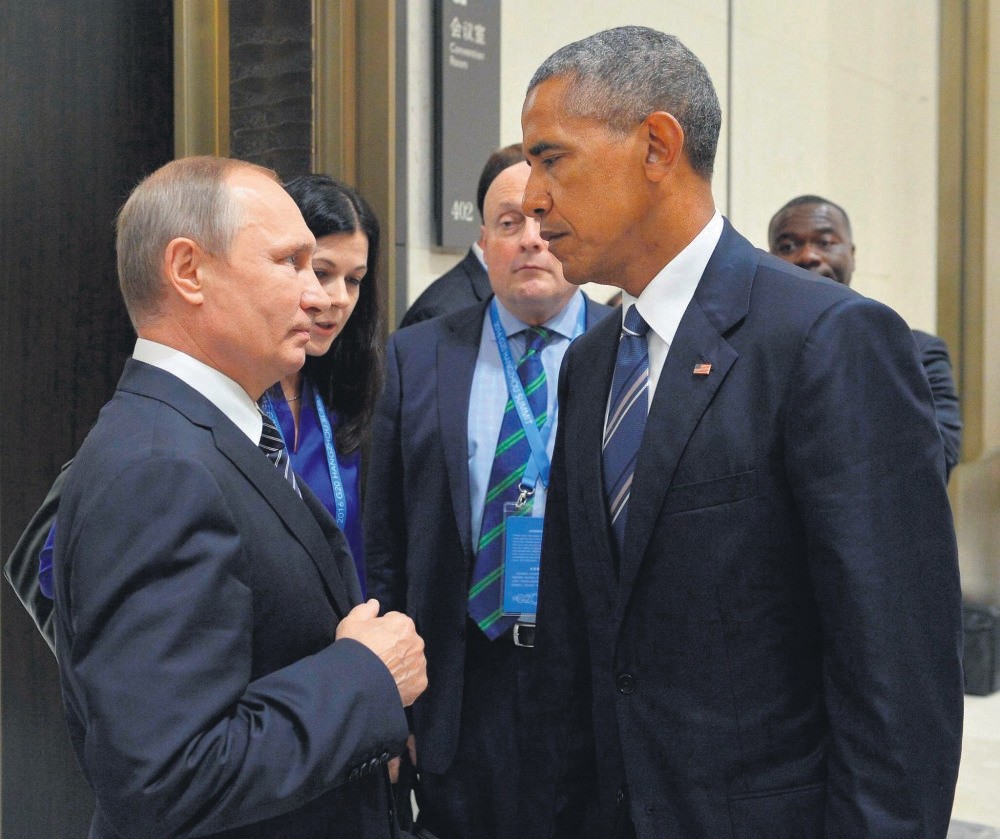 Russian President Vladimir Putin meets with U.S. President Barack Obama on the sidelines of the G20 summit in Hangzhou, China, Sept. 5.
by Daily Sabah with Reuters Sep 07, 2016 12:00 am
Amid accusations of the Kremlin meddling in the U.S. presidential election, the United States President Barack Obama warned his counterpart Russian President Vladimir Putin of cyber arms race between the two countries. During the G-20 conference in China, President Obama held a 90-minute meeting with Putin, stressing a Cold War-style escalation over Russian hacking. "We have had problems with cyber intrusions from Russia in the past," but Obama cautioned that the United States would not immediately seek to play into a "cycle of escalation." "What we cannot do is have a situation where this becomes the wild, wild West, where countries that have significant cyber capacity start engaging in unhealthy competition or conflict through those means," he stated.

Democratic presidential candidate Hillary Clinton on Monday expressed concern about "credible reports" of Russian interference in the U.S. election and accused Donald Trump of being fixated on dictators including Russia's Vladimir Putin. Taking questions from reporters for more than 20 minutes on her campaign plane, Clinton said both Democrats and Republicans should be concerned about Russia's behavior. "The fact that our intelligence professionals are now studying this and taking it seriously raises some grave questions about potential Russian interference with our electoral process," Clinton said.

"We are facing a very serious concern. We've never had a foreign adversarial power be already involved in our electoral process. ... We've never had the nominee of one of our major parties urging the Russians to hack more," she added.

Trump, the Republican nominee, has praised Putin, the president of Russia, and has called on Moscow to dig up tens of thousands of "missing" emails from Clinton's time as head of the U.S. State Department. He later said his comments were meant to be sarcastic.

Clinton has previously tied Russian intelligence services to the cyber hack on the Democratic National Committee. Asked on Monday if she believed the Russian government was trying to help elect her opponent, Clinton paused. "I often quote a great saying that I learned from living in Arkansas for many years: If you find a turtle on a fencepost it did not get there by itself," she said. "I think it is quite intriguing that this activity has happened around the time Trump became the nominee."Clinton, a former secretary of state and a former first lady, has drawn criticism for not holding regular press conferences. On Monday she took questions on an array of topics for more than 20 minutes.

Clinton dismissed concerns about her health as one of many conspiracy theories that were lobbed against her. She blamed seasonal allergies for a sustained coughing fit at an earlier event in Ohio. During the question and answer session on her plane, she also had to step away because of persistent coughing.

Clinton, whose use of a private email account during her time as secretary of state has dogged her 2016 presidential campaign, said she understood and took classification seriously when she was President Barack Obama's top diplomat. Republicans have demanded that the Justice Department open a new investigation into whether the Democratic presidential nominee lied during testimony last year before a House panel investigating the deadly 2012 attacks in Benghazi, Libya. The FBI has published documents summarizing interviews with Clinton and her top aides.

Clinton said that the attacks on her family's foundation were not rooted in fact and sidestepped a question on whether her daughter, Chelsea, should step down from the foundation's leadership if she is elected in November.
RELATED TOPICS