Russia, US at loggerheads over Syria, Ukraine 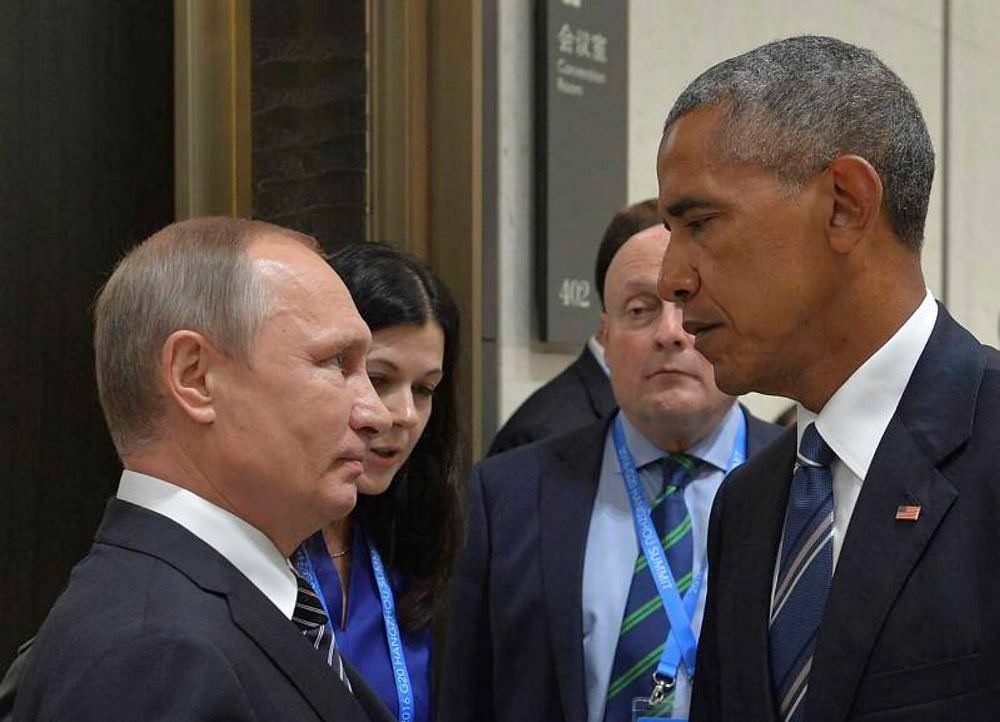 Russian President Vladimir Putin met with his US counterpart Barack Obama on the sidelines of the G20 Leaders Summit in Hangzhou on Sept. 5.
by Daily Sabah with Wires Oct 07, 2016 12:00 am

Tension between the old Cold War superpowers has escalated with ongoing disputes over Syria and Ukraine. Contact with the U.S. on Syria is ongoing, the Kremlin said, denying U.S. claims

Two days after the Kremlin shelved a plutonium pact with Washington, Russia said it was suspending joint research with the United States on nuclear energy projects, in another sign of increasing tension. A research agreement was suspended and an agreement between Rosatom and the U.S. Department of Energy on feasibility studies into the conversion of Russian research reactors to low-enriched uranium was also terminated. Russian officials stated that suspension of the nuclear energy delay is considered as counter-measures to the U.S. sanctions imposed on Russia over Ukraine.

Relations between the United States and Russia plummeted Monday as Washington suspended diplomatic contacts with Moscow over failed efforts to end the war in Syria and Russian President Vladimir Putin put on hold a deal with the U.S. on disposing weapons-grade plutonium. Putin on Monday suspended a deal with the United States on the disposal of weapons-grade plutonium, once a symbol of U.S.-Russian rapprochement. Putin's decree cited as reasons for Moscow's move the "emerging threat to strategic stability as a result of U.S. unfriendly actions," as well as Washington's failure to meet its end of the deal.

The two decisions, announced in their respective capitals just hours apart Monday, were ostensibly unrelated but underscored deep mistrust and rising tensions between the former Cold War foes, who are increasingly at odds on a number of issues, particularly Syria and Ukraine.

Regarding the suspension of bilateral talks over Syria by the U.S., Russian envoy denied such claims, stating that Russia-U.S. contacts on Syria are going on constantly and agreements have not cancelled. "The contacts are going on permanently. [Russian] Foreign Minister Sergey Lavrov talks with [U.S. Secretary of State] John Kerry over the phone almost daily," Russian president's special envoy for the Middle East and African countries and Deputy Foreign Minister Mikhail Bogdanov said on Thursday, as reported by Russian news agency TASS. "As for military contacts, this question should be addressed to the military. There is no alternative to cooperation, information exchange, coordination of our steps to effectively combat extremists.

"One should look attentively at what the Americans said and interpret these statements correctly," he noted. "I believe they do not want to slam the door in terms of all the contacts. That is why John Kerry calls Sergey Lavrov," he added.

The United Nations Special Envoy for Syria Staffan de Mistura offered on Thursday to go to eastern Aleppo and escort up to 1,000 Jabhat Fateh al-Sham fighters out of the city in order to halt ongoing bombardment by Russian and Assad forces. "The bottom line is in a maximum of two months, two and a half months, the city of eastern Aleppo at this rate may be totally destroyed. We are talking about the old city in particular," de Mistura told a news conference in Geneva. "There is only one thing we are not ready to do: be passive, resign ourselves to another Srebrenica, another Rwanda, which we are sadly ready to recognize written on that wall in front of us, unless something takes place," he said.

Moscow's support for de Mistura's idea of escorting fighters from opposition-held areas in east Aleppo came immediately. "It's high time this is done. We'll see if the U.N. special envoy for Syria Staffan de Mistura's idea is meet with positive response," Russian envoy Bogdanov said. "He puts forward his ideas, his suggestions." "His main goal is to establish an inclusive and sustained intra-Syrian dialogue under the auspices of the U.N.," he added.

Assad forces announced Wednesday it was scaling back its bombardment of opposition groups in devastated Aleppo, in a surprise move nearly two weeks after declaring an all-out assault to capture the city. Assad forces announced the offensive to capture the whole city on Sept. 22, ushering in a ferocious bombing campaign on opposition-held quarters that a monitor says has killed at least 270 people, including 53 children. Once Syria's commercial hub, Aleppo has been divided by opposition groups in the east and Assad forces in the west since violence erupted there in 2012.
RELATED TOPICS