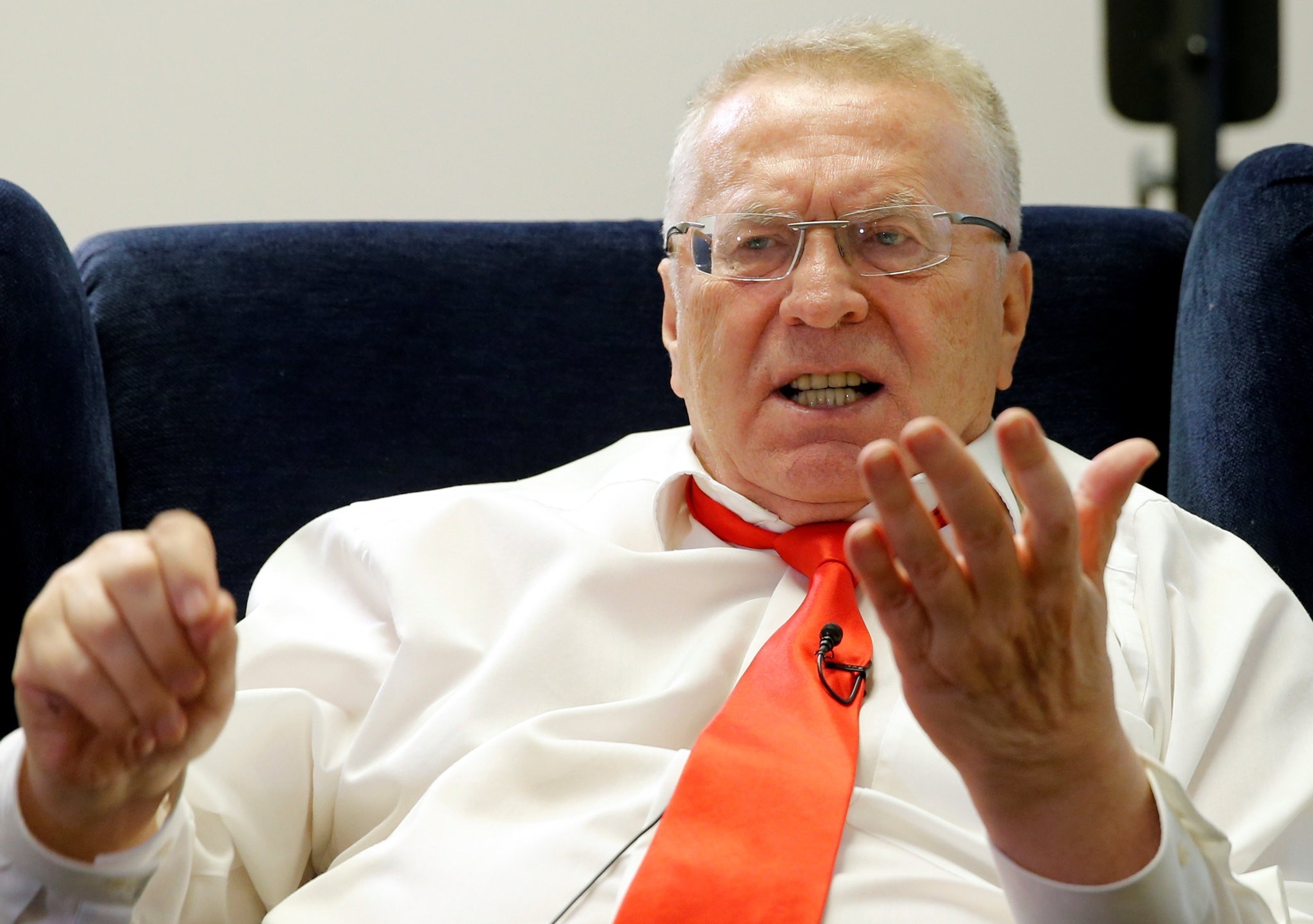 Vladimir Zhirinovsky, leader of the Liberal Democratic Party of Russia, speaks during an interview with Reuters in Moscow, Russia, October 11, 2016. (REUTERS Photo)
by reuters
Oct 12, 2016 12:00 am

Americans should vote for Donald Trump as president next month or risk being dragged into a nuclear war, according to a Russian ultra-nationalist ally of President Vladimir Putin who likes to compare himself to the U.S. Republican candidate.

Vladimir Zhirinovsky, a flamboyant veteran lawmaker known for his fiery rhetoric, told Reuters in an interview that Trump was the only person able to de-escalate dangerous tensions between Moscow and Washington.

Many Russians regard Zhirinovsky as a clownish figure who makes outspoken statements to grab attention but he is also widely viewed as a faithful servant of Kremlin policy, sometimes used to float radical opinions to test public reaction.

"Relations between Russia and the United States can't get any worse. The only way they can get worse is if a war starts," said Zhirinovsky, speaking in his huge office on the 10th floor of Russia's State Duma, or lower house of parliament.

Zhirinovsky's comments coincide with deep disagreements between Washington and Moscow over Syria and Ukraine and after the White House last week accused Russia of a campaign of cyber attacks against Democratic Party organizations.

Even as WikiLeaks released another trove of internal documents from Clinton's campaign on Wednesday, Putin insisted his country was not involved in an effort to influence the U.S. presidential election.

Zhirinovsky likes to shock liberal public opinion and he has frequently heaped scorn on the West, which he and other Russian nationalists regard as decadent, hypocritical and corrupted by political correctness.

His combative style, reminiscent of Trump's, ensures him plenty of television air time and millions of votes in Russian elections, often from the kind of blue-collar workers who are the bedrock of the U.S. Republican candidate's support.

Zhirinovsky once proposed blocking off mostly Muslim southern Russia with a barbed wire fence, echoing Trump's call for a wall along the U.S. border with Mexico.

Zhirinovsky, who said he met Trump in New York in 2002, revels in his similarities with the American businessman - they are the same age, favor coarse, sometimes misogynistic language and boast about putting their own country first. Zhirinovsky has even said he wants a DNA test to see if he is related to Trump.

But unlike Trump, a billionaire real estate developer who casts himself as the anti-establishment candidate in the U.S. presidential race with no past political experience, Zhirinovsky is a consummate political insider who has sat in the Duma for more than two decades.

Putin has also praised Trump as "very talented", while the Republican candidate has said the Kremlin boss is a better leader than U.S. President Barack Obama. Clinton has accused Trump of being too cozy with Putin and questioned his business interests in Russia.

In other comments that have delighted Moscow, Trump has questioned the value of NATO for Washington, has spoken ambiguously about Russia's 2014 annexation of Ukraine's Crimea and suggested that the United States under his leadership would adopt a more isolationist foreign policy.

"He (Trump) won't care about Syria, Libya and Iraq and why an earth should America interfere in these countries? And Ukraine. Who needs Ukraine?," said Zhirinovsky, who once counted himself a friend of Iraq's Saddam Hussein and Libyan dictator Muammar Gaddafi and whose deaths he still laments.

"Trump will have a brilliant chance to make relations more peaceful ... He's the only one who can do this," he said, adding that Trump could even win a Nobel peace prize.

In contrast, Zhirinovsky described Clinton as "an evil mother-in law" and said her record as secretary of state under Obama in 2009-2013 showed she was unfit to lead her country.

"She craves power. Her view is that Hillary is the most important person on the planet, that America is an exceptional country, as Barack Obama said," said Zhirinovsky. "That's dangerous. She could start a nuclear war."

In typically chauvinistic remarks, Zhirinovsky said Clinton's gender should also bar her from the presidency.

"Most Americans should choose Trump because men have been leading for millions of year. You can't take the risk of having one of the richest, most powerful countries led by a woman president," he said.

Asked about lewd comments Trump made about women in 2005 that have harmed his campaign, Zhirinovsky defended the Republican: "Men all round the world sometimes say such things that are just for their comrades. We must only consider his business (and political) qualities."

Though Putin and Trump have never met, Zhirinovsky said he believed they could establish a close working relationship, adding: "Victory for Trump would be a gift to humanity. But if Hillary Clinton wins it will be the last U.S. president ever."