60 mayors around the world form 'global parliament' to manage urbanization 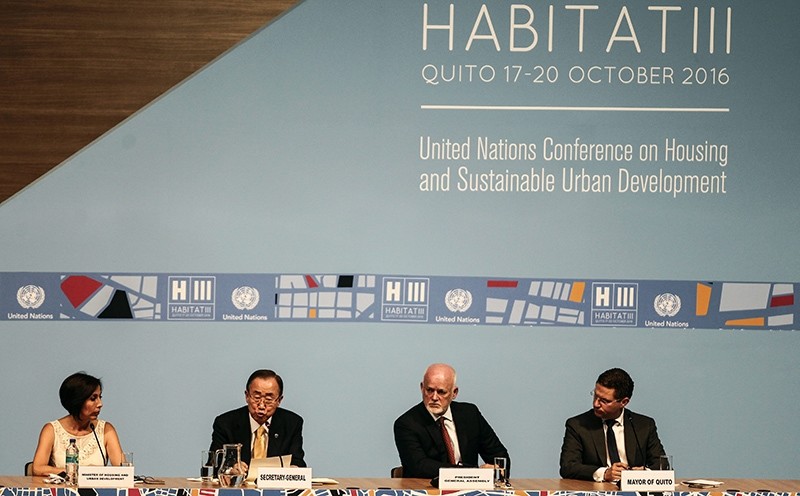 Ecuador's Housing Minister Maria de los Angeles Duarte, UN's Secretary General Ban Ki-moon, President of the UN's General Assembly Peter Thomson and Quito's Mayor Mauricio Rodas (EPA Photo)
by Oct 17, 2016 12:00 am
More than 60 mayors from around the world have joined forces to create an alliance dubbed a 'global parliament' to demand a more powerful role in the management of city growth and urbanization.

Speaking on the eve of the United Nations Habitat III conference in Quito, Ecuador, on Sunday, the mayors outlined a united vision in which local government would lead the global response to rising urbanisation.

They said collaboration rather than competition would help them address the most urgent challenges for the world's cities, from affordable housing and transport to climate change, migration and refugees.

The mayor of Montreal, Denis Coderre, quoted U.N. Secretary-General Ban Ki-moon who once said that if "you need to settle a problem, ask a mayor" and urged his colleagues to remember that "united we conquer".

"I believe that national governments will have to realize that cities exist and that it is not just in speeches that we make a difference in the quality of life of our people, our citizens," he said.

"Today we find ourselves at a crossroads: with migration the world is not defined any longer by countries or continents but by cities. We, local government, are the ones at the frontline to address many of the most pressing issues."

More than 35,000 people, from academics and planning specialists to government officials and U.N. leaders have gathered together in the Andean city to discuss the future of the world's cities.

Held every 20 years, the conference comes at a point when, for the first time in history, more people live in cities than rural areas.

The mayoral group met in The Hague last month to launch a Global Parliament of Mayors (GPM).

The idea is the brainchild of political scientist Benjamin Barber. In his book "If Mayors Ruled the World", Barber argues that mayors are pragmatic officials driven by the need to problem-solve at local level.

Speaking in Quito, the mayors said that working as a united front would allow them to share ideas and best practice on critical issues such as inequality and development pressures which are a problem for all cities in an increasingly globalised world.

The mayor of Barcelona, Ada Colau, delivered a passionate call for cities to be "fair for all", the young and old, able and not, refugees and migrants, straight and gay.

She said the feminisation of politics at local government level had already achieved more livable cities and that the group had to work for more women at the helm.

Berlin's mayor, Michael Mueller, and his Cologne counterpart, Andreas Wolter, spoke of their pride at their cities' generosity of spirit in embracing and rehousing refugees.

"We still have a long way to go but this is just one of the many tasks ... we have thousands of lone women, lone children (refugees); we don't run away when the situation gets critical," Wolter said.

The mayors said that local government is the tier closest to city residents and that the role of local government must be key if the New Urban Agenda, to be adopted this week in Quito, is to succeed.

The document aims to guide the growth of cities, towns and informal settlements, ensure that they are sustainable, do not destroy the environment and protect the rights of the vulnerable.

But with 175 pledges lacking specific goals or timelines to support aspirations such as "people-centred development" and "equally shared opportunities", some analysts have said it is unlikely the summit will deliver concrete improvements on the ground.