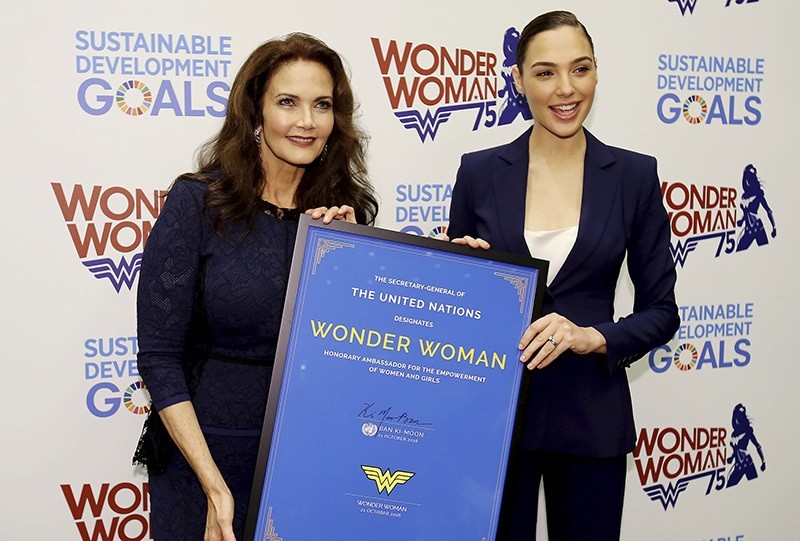 In this image released by Starpix, actress Lynda Carter, who starred in the 1970s series,,Wonder Woman,, left, and actress Gal Gadot (AP Photo)
by Associated Press Oct 22, 2016 12:00 am

The United Nations celebrated Wonder Woman's 75th birthday on Friday by naming the comic book character as its new Honorary Ambassador for the Empowerment of Woman and Girls, despite frustration from both inside and outside the world organization that the spot should go to a real — and less sexualized — woman.

The carefully choreographed ceremony was marred by some 50 U.N. staffers protesting by the visitors' entrance to the U.N., who then went inside the Economic and Social Council chamber and silently turned their back to the stage during the opening speech, some with their fists in the air.

U.N. staffer Cass DuRant, who held a sign saying "Real Women Deserve a Real Ambassador," said the protesters "don't think that a fictitious comic book character wearing basically what looks like a Playboy-type bunny outfit is really the right message we need to send to girls or even boys for that matter."

The super heroine's image will be used by the U.N. on social media platforms to promote women's empowerment, including on gender-based violence and the fuller participation of women in public life (using the hashtag WithWonderWoman). The push, hoping to reach young people, is backed by DC Entertainment and Warner Bros., which produce both comics and films featuring Wonder Woman.

But an online petition , started by U.N. staffers, asked the secretary-general to reconsider the appointment, saying, "The message the United Nations is sending to the world with this appointment is extremely disappointing." As of Friday afternoon, it had more than 1,100 signatures.

The Friday event brought together actress Lynda Carter, who played Wonder Woman in the 1970s TV series, and Gal Gadot, who has taken on the role in the forthcoming "Wonder Woman" film, as well as Girl Scouts in Wonder Woman T-shirts and U.N. staffers' kids who skipped school, with one girl wearing a full Wonder Woman costume, complete with head piece. Diane Nelson, president of DC Entertainment, gave a speech in which she argued that stories — even comic book stories — can "inspire, teach and reveal injustices."

Carter, who gave a moving speech about how Wonder Woman embodies the inner strength of every woman, was the only one to acknowledge the protesters in her remarks, saying "Please embrace her," she said. "To all those who don't think it's a good idea, stand up and be counted."

As for Gadot, she said after the event: "I'm the kind of person who always looks at the half-full glass. I care for the people who care and I'm here for a wonderful cause today." She added, through a thin smile: "That's all what my focus is."

But among those thinking the glass was half empty was Shazia Z. Rafi, managing director of the consulting firm Global Parliamentary Services. She argued that the choice of Wonder Woman was tone deaf at a time when real women are fighting against sexual exploitation and abuse.

"I think it's a lot of rubbish that you can appoint a cartoon female to represent gender equality in this day and age, even if it is to reach younger women," said Rafi.

Rafi said there were plenty of real heroines that could be the face for gender equality.

The Wonder Woman appointment came after many women were dismayed that another man, Antonio Guterres, the former prime minister of Portugal, was chosen to be the next secretary-general, even though more than half the candidates were women.

Rafi, who had campaigned for a woman to be appointed the world's diplomat-in-chief, said the decision to name Wonder Woman as an ambassador was effort to appease disappointed staffers.

Rafi and the petition also take issue with Wonder Woman's skimpy outfit, arguing that the world might not embrace a scantily clad character in a thigh-baring body suit with an American flag motif and knee high boots.

It is not the first time the United Nations has partnered with a huge media company. In March, the U.N. appointed Red, the leader of the "Angry Birds" mobile game characters, as an envoy to tackle climate change. That campaign is in partnership with Sony Pictures Entertainment.