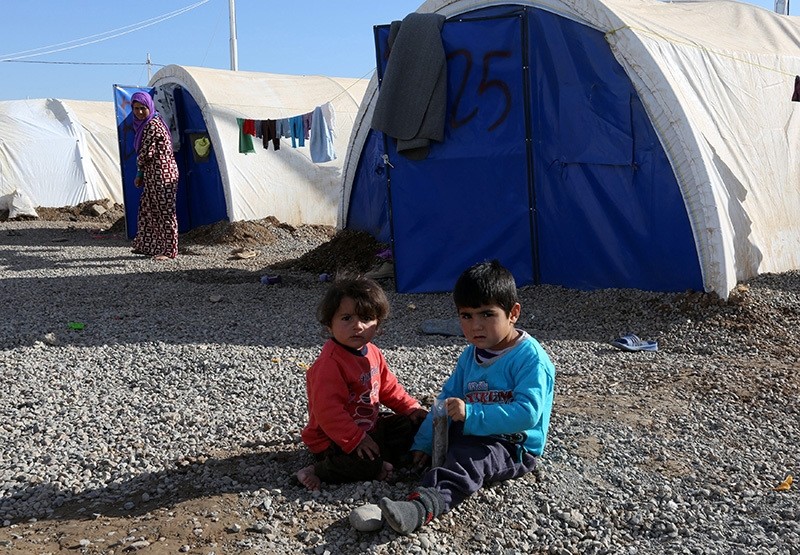 Iraqi displaced children from Mosul sit on the ground near the tents at Khazir camp, east of Mosul, northern Iraq, 04 December 2016 (EPA Photo)
by Associated Press Dec 06, 2016 12:00 am

The "I Hear You" campaign launched Tuesday by the Boston-based charity features videos of the actors, many of them close to tears, reading the firsthand stories of refugees aloud.

The refugees express their desires for normalcy, peace, a permanent home, an education and a job. They also talk about the things they miss, including neighborhood cookouts and trips to the amusement park, and articulate the grief they feel for long-lost friends and relatives.

There are currently more than 65 million people in the world who have been forced from their homes by war, disaster, poverty, inequality and the effects of climate change, the most since World War II, according to Oxfam.

"Our house was destroyed. We don't have anything left," Melissa Leo says, telling the story of a Syrian family's matriarch who busies herself cleaning the family's tent and taking care of her grandchildren.

"I won't stop teaching," Cho reads in another, recounting the story of a teacher in a refugee camp who draws letters in the dirt just to make sure the children get an education.

The project was created by Julie Anne Robinson, a Golden Globe nominated director and producer who wanted to show that refugees have the same hopes and dreams that we all have.

"I came up with the idea for this project because I wanted to find a way to communicate the human stories of displaced people," she said.

"I don't believe we can become numb to the pain and suffering of so many people in the world when there are actually real things we can do," she said in a statement released by Oxfam.