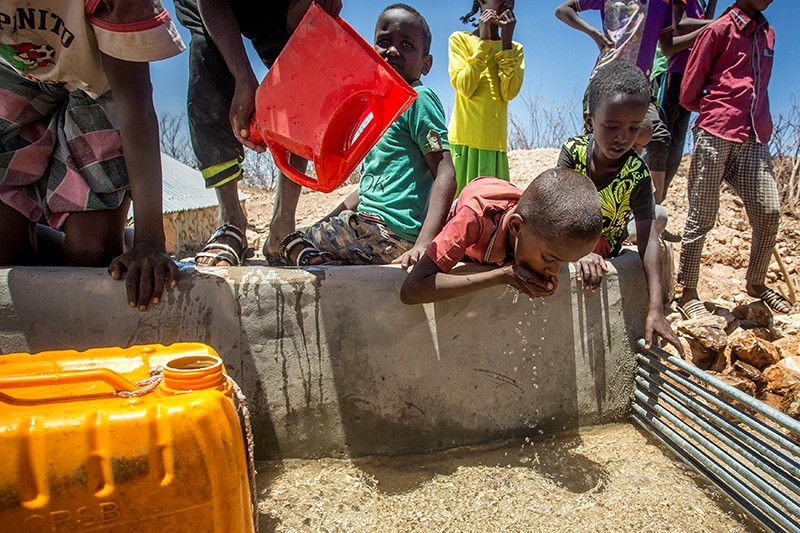 Children drink water delivered by a truck in the drought-stricken Baligubadle village near Hargeisa, the capital city of Somaliland (Reuters Photo)
by Compiled from Wire Services Mar 22, 2017 12:00 am
One in four children — 600 million in total — may live in areas with severely limited water resources by 2040, putting them at risk of deadly diseases like cholera and diarrhoea, the U.N. children's agency UNICEF said on Wednesday.

In research released on World Water Day, the United Nations children's agency warned that in just over two decades nearly 600 million children will be living in areas with severely limited safe water sources, as population growth and surging demand for water clash with the effects of climate change.

Climate change is one of the reasons behind reduced water sources in the future, impacting "the quality and quantity of the water", Cecilia Scharp, a senior water advisor at UNICEF, told the Thomson Reuters Foundation.

Flooding, which is expected to increase due to rising sea levels and changing weather patterns, can pollute water supplies and spread unsafe water across wide areas.

Droughts are also expected to increase in frequency and severity.

Women and girls now spend 200 million hours a day collecting water, and this will rise if they are forced to travel further to reach water sources, making them vulnerable to attack in some countries, UNICEF said.

UNICEF's projections are based on models assuming no action is taken to conserve water and tackle pollution, Scharp said.

But governments, industries, agricultural businesses and communities can help diminish the impact of climate change on children in countries pressed for water resources, the agency said.

Businesses should ensure they are conserving as much water as possible, and reusing waste water whenever they can, UNICEF said.

"You can use economic incentives so people don't overuse (water)," Scharp said of local governments.

"You can put restrictions on ... personal use of water in urban areas where a lot of water is used for lifestyle activities, more than (for) consumption."

Poorer children will be hurt the most by a depletion of water sources in the future. This "should come as no surprise", UNICEF said.