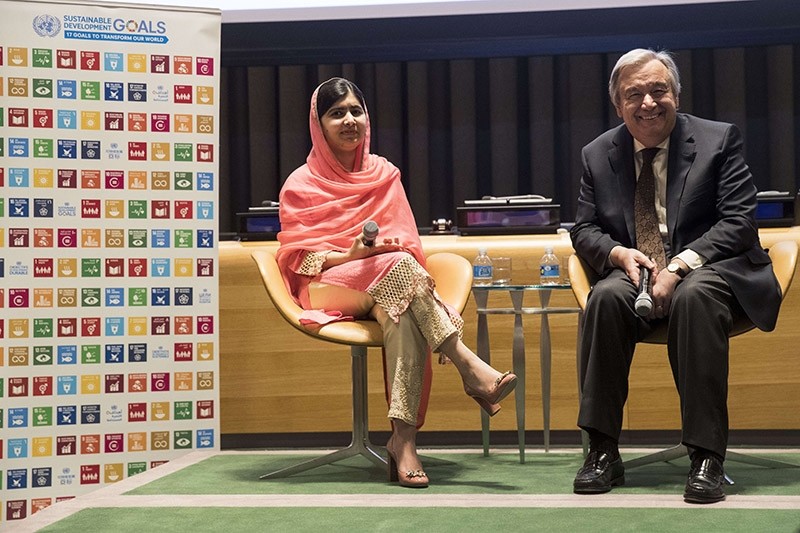 Malala Yousafzai and UN Secretary-General Antonio Guterres take questions from the audience during a ceremony to name her as a United Nations Messenger of Peace at UN headquarters, April 10, 2017 in New York City. (AFP Photo)
by Anadolu Agency Apr 11, 2017 12:00 am

Malala Yousafzai on Monday was named the youngest UN Messenger of Peace, adding to her accolades as a world-renowned activist focusing on education and women's empowerment.

"It is an enormous pleasure to have you as our Messenger of Peace," UN Secretary-General Antonio Guterres told Malala as he introduced the 19-year-old from Pakistan as a new envoy for the global body.

Guterres recognized Malala as a "hero", and praised her modesty, calling her a "fantastic example of friendship and simplicity".

Guterres added that he was "inspired by your dedicated service to the ideals and objectives of the United Nations, especially its vision of a life of dignity for all people".

In her acceptance speech, Malala stressed that "education is a right of every child and especially for girls", and that that "right should not be neglected".

"The extremists tried all their best to stop me, they tried to kill me and they didn't succeed," Malala said. "Now this is a new life, this is a second life and it is for the purpose of education."

Malala was shot in the head by Taliban terrorists in 2012 for her bravery and resilience in defense of girls' education, sparking international outrage and outpouring of support for the young girl.

She not only survived the attack, but thrived as a global figure, setting up an education NGO, the Malala Fund, and becoming the youngest laureate of the Nobel Peace Prize in 2014 at the age of 17.

Regarding the horrific attack she suffered, Malala, a practicing Muslim, made a point of differentiating between extremism and Islam.

"I feel really disappointed to see on media how Islam is portrayed. There are 1.6 Muslims in this world," she said.

"The true message of Islam is peace, the word Islam itself means peace," she said, adding that she was "proud to be a Muslim".

"Education, learning, getting knowledge, discovering new things is the key part of Islam, which we often forget," Malala said.

She stressed that "Muslims need to unite and stand really strongly against terrorists and say that 'they are not us, we don't believe in anything that they are doing'."