Millions of Christians throughout the world celebrate Easter 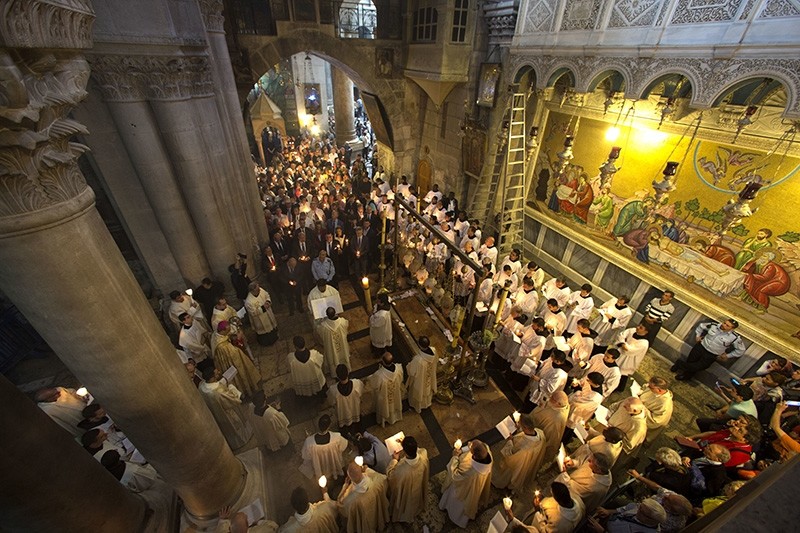 Christian clergymen hold candles during the Easter Sunday procession at the Church of the Holy Sepulchre, traditionally believed by many Christians to be the site of the crucifixion and burial of Jesus Christ, in Jerusalem, Sunday, April 16, 2017 (AP
by Compiled from Wire Services Apr 16, 2017 12:00 am

Christians marked Easter Sunday at the Jerusalem site where they believe Jesus's resurrection miracle occurred, with some prostrating themselves over his tomb and leaving in tears.

Visitors and worshippers filed through the Church of the Holy Sepulchre, built on the site where tradition says Jesus was crucified, buried and resurrected.

It was the first Easter since the unveiling in March of renovations to the ornate, 19th-century shrine covering Jesus's tomb following a $3.7-million project that restored its stones to their original reddish-yellow and reinforced the heavily visited site.

This year's holiday also fell on the same date for both Western and Eastern Christians, an irregular occurrence since they follow different calendars.

Masses were staggered throughout the day for the various denominations that co-exist, often uneasily, in the church in Jerusalem's Old City.

As mass was underway, visits continued, with pilgrims rubbing clothing, veils and even pictures on mobile phones against the shrine over the tomb and the stone where Jesus's body was anointed after his crucifixion.

Visits underground to the tomb itself were however off limits during masses.

"It's beautiful," Michael Hanna, 64, a Coptic Christian originally from Egypt but who has lived in Australia since 1980, said of his visit.

"You can't imagine the feeling touching the places where Jesus touched. I can't describe the feeling," the postal worker said.

Archbishop Pierbattista Pizzaballa, apostolic administrator of the Latin Patriarchate of Jerusalem, entered through the church's heavy wooden doors to lead mass, stopping to kneel before the stone where Jesus's body was anointed, then splashing holy water on the crowds.

Tin Nguyen, a 24-year-old from Vietnam working as an intern at an agricultural centre in southern Israel, recorded the mass with a mobile phone and a selfie stick for friends back home since they may never have a chance to visit.

"The spirit here, and the way people come here and gather together in (Jesus's) name," he said. "It's soulful and peaceful."

Wajeeh Nusseibeh, 67, a member of one of the two Muslim families who traditionally hold the key and guard the church, said this year there seemed to be fewer people visiting than in the past.

He blamed tough economic times and conflict, with Middle Eastern Christians under threat in countries such as Iraq and Syria.

At the same time, Jerusalem also remains the focal point of the decades-long Israeli-Palestinian conflict. The Holy Sepulchre is located in east Jerusalem, occupied by Israel in 1967 and later annexed.

Nusseibeh, dressed in a dark suit with a red and black tie, however was keeping the faith.

"We hope to have peace next year," he said as he sat before the entrance's towering wooden doors, keeping an eye on those who entered. "And everyone accepts the other."

Millions of Orthodox Christians around the world also celebrated Easter in overnight services and with "holy fire" from Jerusalem, commemorating the day followers believe that Jesus was resurrected nearly 2,000 years ago.

This year the Orthodox churches celebrate Easter on the same Sunday that Roman Catholics and Protestants mark the holy festival. The Western Christian church follows the Gregorian calendar, while the Eastern Orthodox uses the older Julian calendar and the two Easters are often weeks apart.

Ecumenical Patriarch Bartholomew I, who is the spiritual leader of the world's Orthodox Christian faithful, delivered a message of peace during the midnight service at the Patriarchate in Istanbul.

"Our faith is alive, because it is based on the event of the resurrection of Christ," Bartholomew said.

In his official Easter message issued earlier in the week, Bartholomew urged strong faith in the face of the world's tribulations.

"This message - of the victory of life over death, of the triumph of the joyful light of the (Easter) candle over the darkness of disorder and dissolution - is announced to the whole world from the Ecumenical Patriarchate with the invitation to experience the unwaning light of the resurrection," his message said.

In predominantly Orthodox Romania, Patriarch Daniel urged Christians to bring joy to "orphans, the sick, the elderly the poor ... and the lonely."

Late Saturday, Orthodox clerics transported the holy flame from Jerusalem by plane and it was then flown to other churches around the country. According to tradition the flame appears each year at the Holy Sepulchre in Jerusalem and is taken to other Orthodox countries.

In Russia, where Orthodox Christianity is the dominant religion, President Vladimir Putin along with Prime Minister Dmitry Medvedev and his wife Svetlana attended midnight Mass at Moscow's Christ the Savior Cathedral.

The cathedral is a potent symbol of the revival of observant Christianity in Russia after the fall of the officially atheist Soviet Union. It is a reconstruction of the cathedral that was destroyed by explosion under dictator Josef Stalin.

Irinej said in his Easter message that "with great sadness and pain in our hearts, we must note that today's world is not following the path of resurrection but the road of death and hopelessness." He also lamented the falling birth rate in Serbia as "a reason to cry and weep, but also an alarm."

Irinej evoked Kosovo, Serbia's former province which declared independence in 2008. Hundreds of medieval Orthodox churches and monasteries are located there.

Orthodoxy is also predominant in Bulgaria, Ukraine and Moldova.