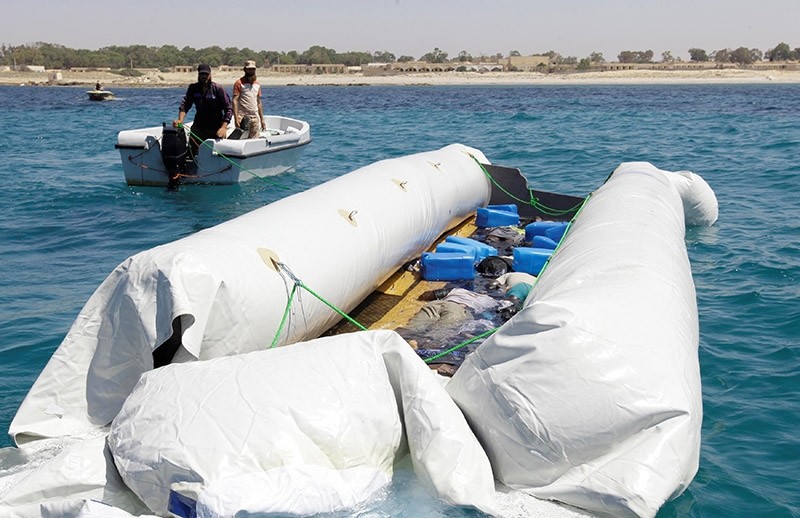 Libyan coastguards recovered the bodies of eight migrants from an inflatable boat found east of Tripoli on Saturday, with dozens of other migrants feared missing, a spokesman said.

"In general this type of boat carries 100 to 110 people, so we do not know what has happened to the others," said Issa al-Zaroog, a coastguard spokesman in the town of Garabulli.

It was not clear how the migrants, whose bodies were spotted by fishermen, had died, coastguard officials said.

Earlier, Tripoli coastguard spokesman Ayoub Qassem said one Bangladeshi migrant had been killed and two wounded in crossfire when coastguards from Zawiya, just west of Tripoli, had clashed on Friday with smugglers escorting migrant boats out to sea.

Qassem said two rubber boats and a wooden vessel carrying some 570 migrants had been intercepted near Sabratha, west of Tripoli, triggering the clashes, and that coastguards had destroyed a boat and a jet-ski used by smugglers, arresting three of them.

But afterwards a further five rubber migrant boats got away after smugglers had fired at the coastguard from the shore and from boats, Qassem said.

The International Organization for Migration (IOM) said separately that 380 migrants in three rubber boats had been intercepted off Zawiya and brought back to Libya on Friday, and that another 438 were intercepted on Saturday.

Libya is the most common departure point for migrants trying to reach Europe by sea, with the number making the crossing rising sharply since 2014.

So far this year more than 61,000 migrants have arrived in Italy after crossing the central Mediterranean, according to the IOM. Most are packed onto ill-equipped vessels by Libyan smugglers, and are rescued by European ships once they reach international waters.