Russia does not consider US its enemy, Putin says during annual Q&A session 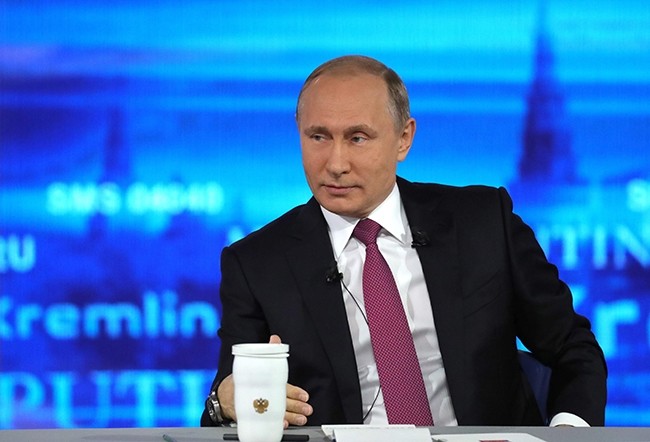 Russian President Vladimir Putin dismissed the notion that his country views the U.S. as an enemy during the 15th annual Q&A session on Thursday.

"We do not consider America our enemy," Putin said, in response to an American man who asked via video link how to deal with the anti-Russian sentiment present among his compatriots.

Putin said he had no particular advice to offer the man, while dismissing recent problems between the two countries as a result of internal political strife among the U.S. leadership.

"We know that we have many friends in America," Putin said.

Putin also said that Russia has climbed out of recession despite continuing Western sanctions, adding that the restrictions have forced the country to "switch on our brains" to reduce its dependence on energy exports.

Speaking about international sanctions, Putin deplored the U.S. Senate's Wednesday decision to impose new sanctions on Russia as a reflection of Western efforts to "contain" Russia, but insisted that the measures only have made the country stronger.

The Republican-led Senate voted Wednesday to punish Moscow for interfering in the 2016 election by approving a wide-ranging package of sanctions that targets key sectors of Russia's economy and individuals who carried out cyberattacks.

The Senate bill follows up on several rounds of other sanctions imposed by the U.S. and the EU over Russia's illegal annexation of Ukraine's Crimean Peninsula and its support for pro-Russia insurgents in eastern Ukraine.

Putin argued that Russia has done nothing to warrant the Senate's move, saying it highlights the West's policy of containing Russia.

Putin said that the sanctions have given Russia an incentive to shed its dependence on oil and gas exports and "switch on our brains and talents" to develop other industries. He emphasized that electronics, aerospace industries and agriculture have all received a boost.

Russia has responded to the U.S. and EU sanctions by halting most Western food imports, a move that has helped increase Russian agricultural output.

Russian farmers have pleaded with the Kremlin to keep the import ban even if the West lifts its sanctions, but Putin said that if "our partners lift the sanctions against our economy, we will respond in kind."

The Russian leader claimed that the "crisis is over," pointing at modest economic growth over the past nine months, low inflation and rising currency reserves.

Putin said that a slump in oil prices had been a more important factor in Russia's economic slowdown than the sanctions.

He acknowledged that the Russian economy hasn't yet shed its dependence on exports of raw materials, but noted that non-energy exports have been growing.

Putin recognized that people's incomes have fallen and 13.5 percent of Russians now live below the poverty line currently equivalent to $170.

For the last 15 years President Putin has been holding a live call-in show televised nationwide during which he takes questions from audience members and viewers.

Most of the questions during the tightly-choreographed show were about low salaries, decrepit housing, failing health care and other social problems.