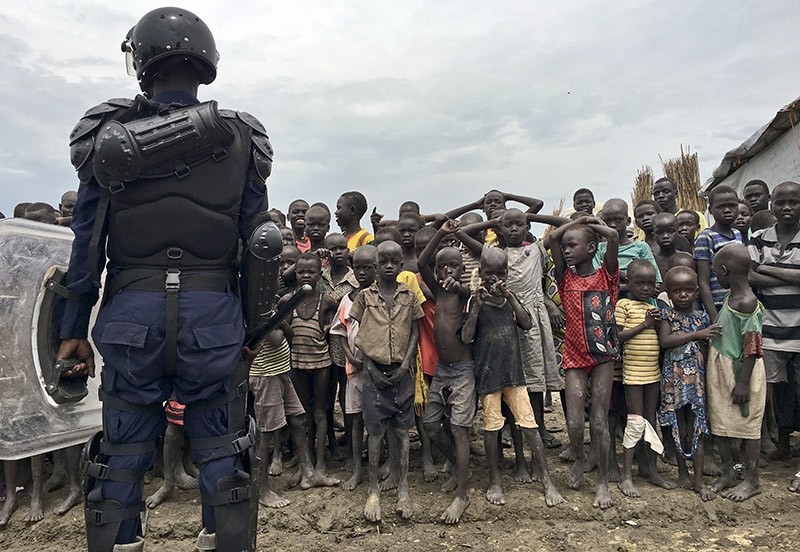 A crowd of displaced people look on in South Sudan's largest camp for the internally-displaced, in Bentiu (AP Photo)
by Jun 19, 2017 12:00 am

Devastating conflicts, violence and persecution in places like Syria and South Sudan had left a record 65.6 million people uprooted from their homes by the end of 2016, the UN said Monday.

That number marks a jump of just 300,000 from the end of 2015, but is more than six million higher than at the end of 2014, according to a fresh report published by the UN refugee agency.

This is "the highest figure since we started recording these figures," UNHCR chief Filippo Grandi told reporters ahead of the report launch.

"By any measure, this is an unacceptable number, and it speaks louder than ever to the need for solidarity and common purpose in preventing and resolving crises," he said.

The figures released ahead of World Refugee Day showed that a full 10.3 million of the world's displaced people fled their homes last year alone, including 3.4 million who crossed international borders to become refugees.

"This equates to one person becoming displaced every three seconds -- less than the time it takes to read this sentence," UNHCR pointed out in a statement.

Most people who have been forced from their homes flee within their own country, and are defined as internally displaced people, or IDPs.

At the end of 2016, there were some 40.3 million IDPs in the world, down slightly from 40.8 million a year earlier, with Syria, Iraq and Colombia accounting for the greatest numbers.

Another 22.5 million people -- half of them children -- were registered as refugees last year, the UNHCR report showed, pointing out that this is "the highest level ever recorded".

Along with the 6.3 million Syrians displaced inside the country, these numbers show that a nearly two thirds of all Syrians have been forced from their homes, the report said.

As the Syrian civil war rages on, desperately needed funding for humanitarian aid in the country has begun to dwindle, Grandi said, lamenting that very little of the billions promised at an international donor's conference in Brussels in April had so far materialized.

The Syrian conflict, which has killed more than 320,000 people, "is becoming a forgotten crisis," he warned.

The UN refugee chief meanwhile voiced most alarm over the rapidly deteriorating situation in South Sudan, which he said was currently the world's "fastest growing refugee crisis and displacement crisis."

South Sudan's civil war, which began in December 2013, has left tens of thousands dead and forced a total of 3.7 million people from their homes -- nearly a third of the population.

Overall, the refugee population from the world's youngest country swelled 85 percent last year to reach 1.4 million by the end of 2016, the UNHCR report showed.

And that number has ballooned by a further half million people since then, the agency said, stressing the most of the refugees had left since the "disastrous breakdown of peace efforts" last July.

Syria and South Sudan were far from the only countries where people were being uprooted en masse, with Monday's report also pointing to large-scale displacement in Afghanistan, Iraq and Sudan, just to name a few.

Monday's report also pointed out that, despite huge focus on Europe's migrant crisis, it is poorer countries that host most of the world's refugees.

A full 84 percent of refugees are living in low- and middle-income countries, UNHCR said, blaming this "huge imbalance" on "the continuing lack of consensus internationally when it comes to refugee hosting and the proximity of many poor countries to regions of conflict."