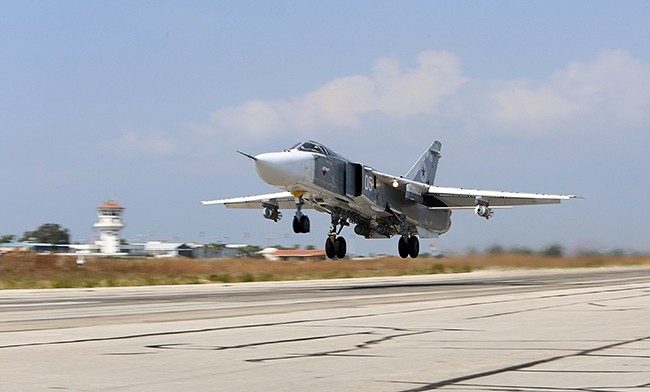 A NATO fighter F-16 jet tried to approach the plane of Defense Minister Sergei Shoigu over the neutral waters of the Baltic Sea Wednesday, but it was "chased off" by a Russian Su-27, RIA Novosti said.

NATO planes tried to escort the Russian defense minister's plane over the neutral waters of the Baltic Sea when he was traveling to Kaliningrad.

The plane in which Shoigu was traveling was escorted by several Russian Su-27 naval aircraft fighters.

One of the NATO planes tried to approach the defense minister's plane, but a Su-27 fighter jet swung its wing to chase off the NATO warplane.

After the response from the Russian jet, the NATO F-16 reportedly retreated.

Shoigu was flying to Kaliningrad, a highly militarised Russian exclave on the Baltic Sea, to take part in a meeting with defence officials there.

At the meeting, he warned that "the situation near Russia's western borders is tending to get worse."

"This is tied with the upsurge of military activity of the NATO countries in Europe," Shoigu added.

The meeting came after NATO held military exercises at the weekend in Poland on the Lithuanian border close to Kaliningrad.

On Monday a Russian jet fighter identified two "American spy planes" over the Baltic, one of which made a "provocative" manoeuvre, the Russian defence ministry said in a statement.

NATO is deploying four international battalions in Poland and each of the former Soviet Baltic states -- Estonia, Latvia and Lithuania.

Moscow sees the NATO build-up in the region as demonstrating a desire to contain Russia.

"The Russian behaviour is unacceptable" and had increased the risk of a serious incident, Swedish Defence Minister Peter Hultqvist told the TT news agency.

That incident, in international airspace, happened on Monday, a Swedish army statement said.

On the same day, a Russian fighter conducted an "unsafe" intercept of a US reconnaissance plane over the Baltic Sea, the US military reported Tuesday.

Russian fighter jets routinely approach and identify aircraft in the skies over the Baltic and the Russian enclave of Kaliningrad, but most of these actions stay within safe limits.

Both Washington and Stockholm said these latest incidents went beyond those limits.

The protests come at a time of heightened tension between Russia and the United States over Syria, where they are backing different sides in the conflict.