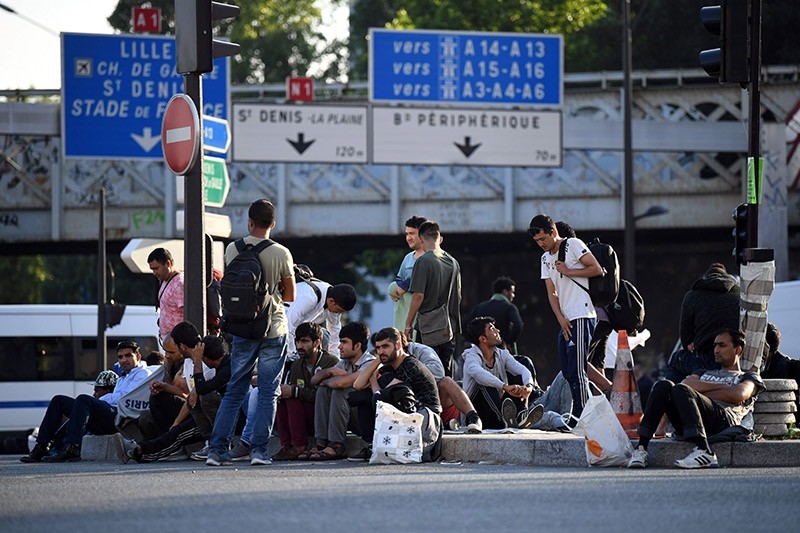 Migrants and refugees gather in the streets during the evacuation of a makeshift camp at Porte de la Chapelle, northern Paris, on July 7, 2017, one of several camps sprouting up around the French capital. (AFP Photo)
by Jul 11, 2017 12:00 am

Some 23 million people around the world have concrete plans to migrate to another country, and the number has been rising in recent years, the International Organization for Migration (IOM) says in a new report.

While the absolute number of estimated potential migrants is high, it represents only 0.4 per cent of the global population, the U.N.-affiliated organization said.

The analysis by IOM's data center in Berlin is based on international surveys conducted by U.S. polling company Gallup.

More than 20 per cent of these potential migrants cited the United States as their preferred destination, making it the most popular by far.

Britain, Saudi Arabia, Canada, France and Germany are also top destinations for people who have made concrete preparations to migrate, such as applying for visas, saving money, or learning a language.

More than 40 per cent among those who are poised to emigrate live in Africa, according to survey data collected between 2010 and 2015.

The world region with the highest migration potential is West Africa, followed by South Asia, North Africa and the Middle East.

Overall, the global number of people with migration plans rose 5 per cent between 2010 and 2015.

"It is important to note that measuring potential migration is not the same as measuring actual migration," IOM spokesman Joel Milmann said at a press briefing in Geneva.

People may end up staying where they are because of migration policy restrictions, lack of money or a change of heart, he said.