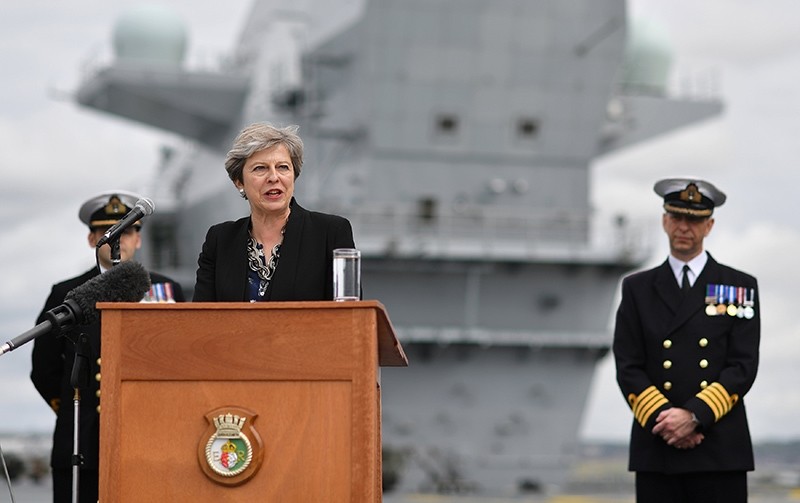 UK's Prime Minister Theresa May stands on the flight deck as she speaks to crew members of British aircraft carrier HMS Queen Elizabeth after it arrived at Portsmouth Naval base, its new home port, in Portsmouth, UK, August 16, 2017. (Reuters Photo)
by Compiled from Wire Services Aug 16, 2017 12:00 am

British Prime Minister Theresa May said Wednesday that there's "no equivalence" between those who have far-right views and those who oppose them, but refused to directly criticize President Donald Trump's remarks blaming "both sides" in weekend violence in Virginia.

Trump inflamed tensions after a deadly rally of white supremacists in Charlottesville, Virginia, by insisting that counter-protesters were also to blame, drawing condemnation from some Republican leaders and praise from white far-right groups.

Britain's leader, speaking in Portsmouth at the unveiling of the nation's new aircraft carrier, rebuffed Trump's comments, underscoring that she saw "no equivalence between those who propound fascist views and those who oppose them."

"I think it is important for all those in positions of responsibility to condemn far-right views wherever we hear them," May told reporters when asked to comment on Trump's stance.

On Monday, May's spokesman had said that while Britain condemned racism, what the U.S. president said was "a matter for him".

May has been widely criticised by domestic political opponents for her efforts to cultivate close ties with Trump, who she visited at the White House days after his inauguration and invited for a state visit to Britain.

Her openly critical comment on Wednesday was an unexpected shift from May, who is keen to cement what she and many other Britons see as a "special relationship" between London and Washington as Britain prepares to leave the European Union.

The invitation to Trump to make a state visit to Britain sparked immediate controversy in Britain when the U.S. head of state announced his widely-criticised ban on travel from Muslim-majority countries just hours after May left the White House.

Trump's stance on the Charlottesville violence drew renewed calls for Trump's state visit, which would be hosted by Queen Elizabeth and involve lavish pageantry, to be cancelled. May had rejected similar calls after previous Trump-related controversies.

"Donald Trump has shown he is unable to detach himself from the extreme-right and racial supremacists," said Vince Cable, leader of the opposition Liberal Democrats.

"It would be completely wrong to have this man visit the UK on a State Visit."

No date has been announced for the visit.