Hard to maintain dialogue with people who confuse Austria and Australia, Putin says 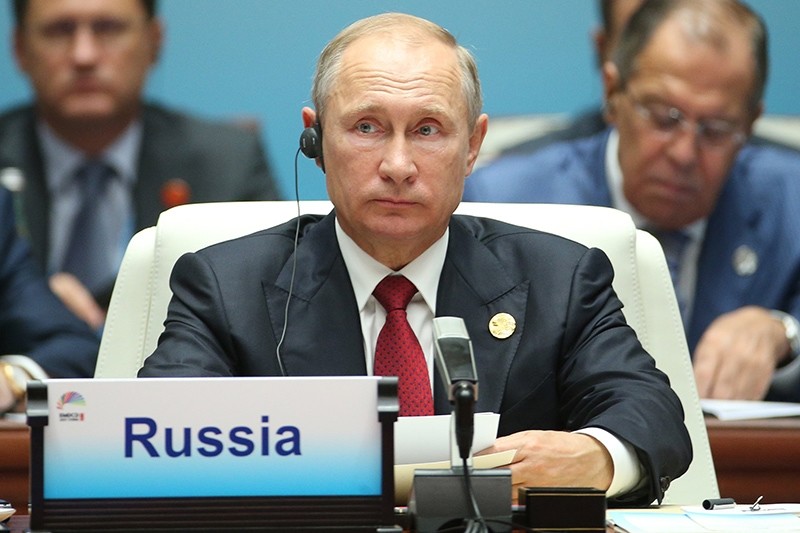 Russian President Vladimir Putin attends the 'Dialogue of Emerging Market and Developing Countries' on the sidelines of the 2017 BRICS Summit in Xiamen, Fujian province, China, Sept. 5, 2017. (EPA Photo)
by Daily Sabah with Agencies Sep 05, 2017 12:00 am

Russian President Vladimir Putin slammed the U.S. Tuesday over its treatment of the Russian diplomatic mission in the country.

The U.S. ordered Russia Thursday to close its San Francisco consulate and buildings in Washington, D.C. and New York by Sept. 2 in retaliation for Moscow cutting the U.S. diplomatic presence in Russia.

Commenting on the move in the Chinese city of Xiamen after the annual summit of the five-nation BRICS club of emerging economies, Putin said that U.S. actions over Russian consulates was "boorish," adding that he will give an order to take Washington to court over violation of Russian property rights on U.S. soil.

Putin said he was looking forward to see how the "vaunted" U.S. court system worked.

"It is difficult to have dialogue with people who confuse Austria with Australia. But there's nothing you can do about it. This, apparently, is the level of political culture of a certain part of the American establishment," Putin said.

Russian president added that he reserved the right to further reduce U.S. diplomatic staff in Moscow, after ordering the U.S. to cut its diplomatic and technical staff in Russia by more than half, to 455 people in retaliation to new sanctions against Russia approved by the Congress.

When asked if he was disappointed in U.S. President Donald Trump, Putin said that the question sounded "very naive."

"[Trump] is not my bride, and I'm also not his bride or groom. We are engaged in statesmanship," Putin said, adding that both him and Trump were driven by interests of their countries.

Putin also warned of a global "catastrophe" unless a diplomatic solution over North Korea is reached, saying imposing further sanctions on Pyongyang would be useless.

Putin's remarks came after the United States called for the "strongest possible measures" against North Korea for detonating what it called a hydrogen bomb on Sunday.

The announcement and North Korea's claim that it could mount the warhead on a missile, dramatically upped the stakes in Pyongyang's standoff with the international community over its banned weapons programs.

"But resorting to just any sanctions in this situation is useless and inefficient," he said.

Putin called for dialogue on the crisis and warned against other actions that could cause the situation to escalate.

"All of this can lead to a global planetary catastrophe and a great number of victims," he said.