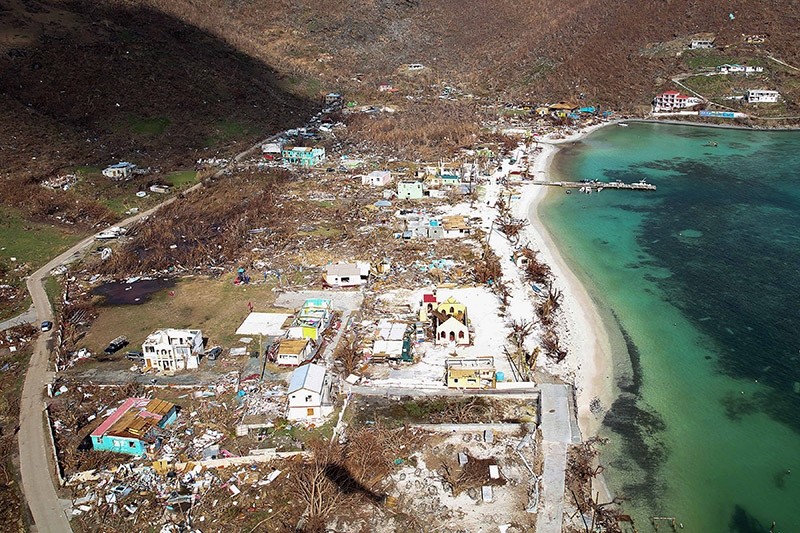 A handout picture released by the British Ministry of Defence (MOD) on September 12, 2017 shows the devastation of the island of Jost Van Dyke in the British Virgin Islands on September 11, 2017 following the passing of Hurricane Irma. (AFP Photo)
by Sep 12, 2017 12:00 am

Over 100 high-risk prisoners escaped in the British Virgin Islands during Hurricane Irma, a British junior minister said on Tuesday, as he raised the death toll in British territories to nine.

"We had a serious threat of a complete breakdown of law and order in the British Virgin islands (BVI)," junior foreign minister Alan Duncan told parliament.

"The prison was breached, over 100 very serious prisoners escaped," he said.

Duncan said Royal Marines were deployed to cope with the threat but did not disclose how many prisoners had been recovered or how many were still at large.

"We have maintained and kept law and order on the BVI, which at one point, could have dramatically threatened the already unfortunate plight of those who had been hit by the hurricane," he said.

Contacted by AFP, the foreign ministry declined to comment.

The Daily Telegraph said notes from a cabinet meeting that were leaked to the press on Tuesday suggested as many as 60 had yet to be recaptured.

"We are working with St Lucia and BVI authorities to secure the transfer to St Lucia of 40 high-risk prisoners that have escaped in BVI," the briefing notes were reported as saying.

Duncan said a total of nine people died in British Caribbean territories -- five in the BVI and four in Anguilla. The authorities had previously reported one person killed in Anguilla.

Britain's response to Irma has been criticized by some local inhabitants as too slow with some complaining about a breakdown of law and order and being left to fend for themselves.

Briton Claudia Knight said her partner Leo Whitting, 38, was stranded on the island of Tortola in the British Virgin Islands archipelago.

"Everyone's turned feral and no-one's going out without being armed... It's turning really nasty," she told the Press Association news agency.

"Leo carries a knife with him," she said.

But Duncan said he "wholeheartedly and comprehensively reject the criticism".