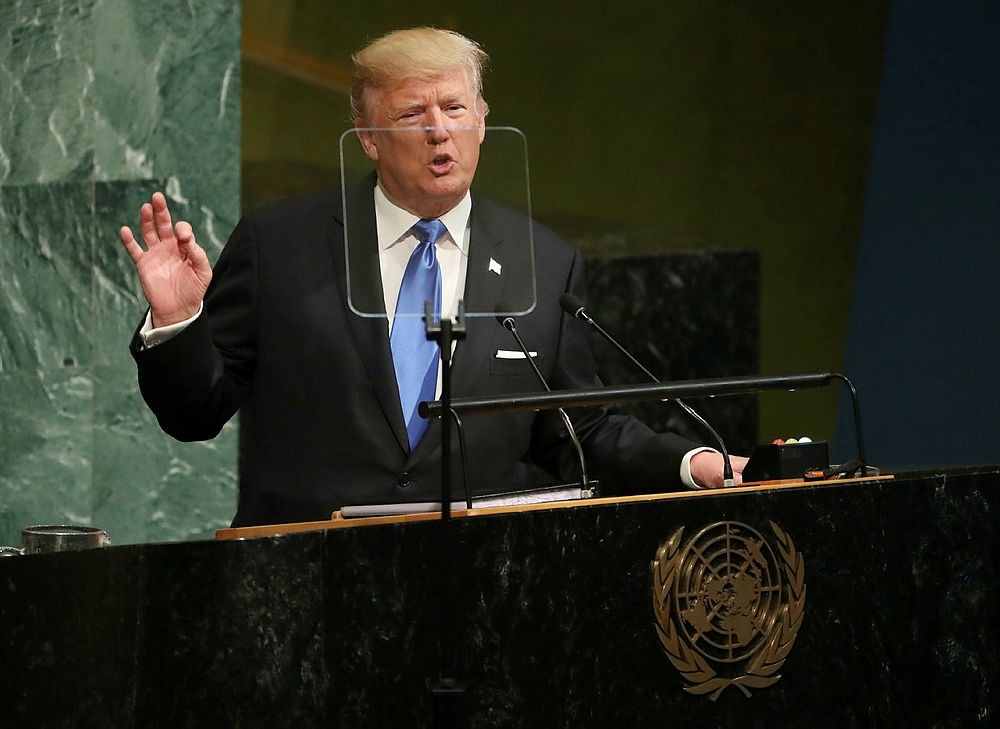 US President Donald Trump warned Pyongyang that if the US is forced to defend itself, "we will have no choice but to totally destroy North Korea" in his first address to the United Nations General Assembly.

"Rocket Man is on a suicide mission for himself and for his regime," he said, using his new nickname for the North Korean leader. "The United States is ready, willing and able, but hopefully this will not be necessary."

"As long as I hold this office, I will defend America's interests above all else, but in fulfilling our obligations to our nations, we also realize that it's in everyone's interests to seek the future where all nations can be sovereign, prosperous and secure," he said.

"America does more than speak for the values expressed in the United Nations charter," he said. "Our citizens have paid the ultimate price to defend our freedom and the freedom of many nations represented in this great hall."

Trump also told world leaders that the 2015 nuclear agreement with Iran was "an embarassment" to the United States.

"We cannot abide by an agreement if it provides cover for the eventual construction of a nuclear program," he said.

Trump also thanked Jordan, Turkey and Lebanon for their role in helping the refugees in Syria.

Trump, whose administration is due to next certify Tehran's compliance with the nuclear deal on October 15, called the nuclear deal "one of the worst and most one-sided transactions the United States has ever entered into," but refrained from saying Washington would withdraw from the agreement.

"I don't think you've heard the last of it, believe me," he said.

Trump chastised the world body's bloated bureaucracy and budget, saying, "We are not seeing the results in line with this investment."

But even with that scolding, Trump pledged to the U.N. that the United States would be "partners in your work" to make the organization a more effective force for world peace.

He praised the U.N.'s early steps toward change and made no threats to withdraw U.S. support. The president's more measured tone stood in sharp contrast to the approach he took at NATO's new Brussels headquarters in May, when he upbraided member nations for not paying enough and refused to back its mutual defense pact explicitly.

While running for office, Trump had labeled the U.N. weak and incompetent. He has suggested it was "not a friend" to the United States or democracy while deriding it as "a club for people to get together, talk and have a good time."