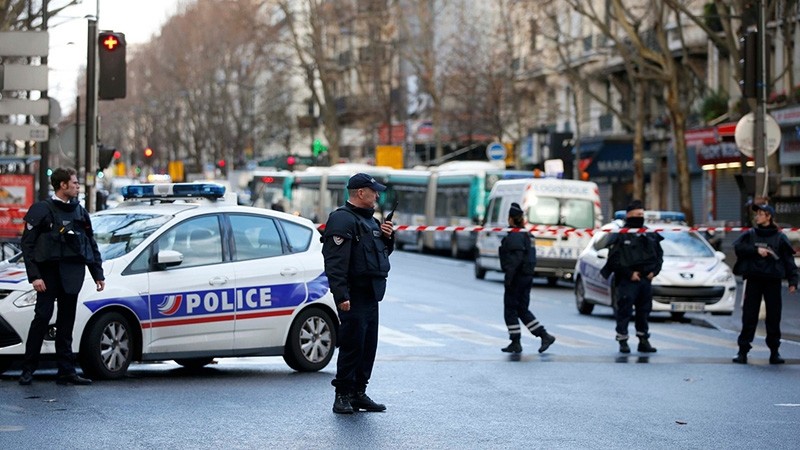 French police arrested five people, including one on a terror watch list after discovering a suspected homemade bomb in one of Paris's most exclusive neighborhoods on the weekend, officials said.

Police discovered two gas cylinders in the hallway of a building in the city's western 16th District in the early hours of Saturday morning and two others on the pavement outside.

A mobile phone attached to the cylinders is being investigated as a possible detonator, a security source told AFP late Monday.

Speaking to Franceinfo radio Tuesday, Interior Minister Gerard Collomb revealed that one of the arrested men was on a police terror watch list.

"That shows that the threat level in France is extremely high," added the minister, who said the incident and a knife attack in Marseille Sunday that left two women dead underlined the importance of a tough new security law.

French lawmakers in the lower house of parliament are set to vote Tuesday on a new counter-terrorism law that rights groups and U.N. experts have criticized for giving too much power to police and local government officials.

In Saturday's incident, a resident alerted police after finding two gas cylinders around 4:30 a.m. (0230 GMT) in his building in the Porte d'Auteuil neighborhood, a source close to the probe said.

Police then found another two cylinders outside the building.

A total of 241 people have been killed in a wave of terrorist attacks in France since 2015.

On Sept. 12, Collomb said that 12 planned attacks had been foiled since the beginning of the year.

Three suspected women terrorists were arrested in September last year after the discovery of gas cylinders in a car near Paris's Notre Dame Cathedral.

The incident came the same weekend as a deadly stabbing in Marseille by a man who used multiple aliases. His motives are unclear, though it was claimed by the Daesh terrorist group.