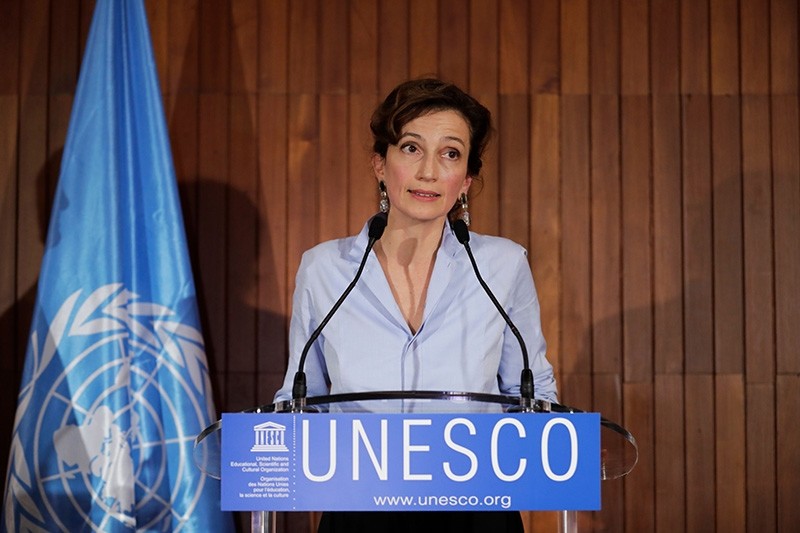 UNESCO's executive board on Friday chose former French Culture Minister Audrey Azoulay to be the U.N. cultural agency's next leader over a Qatari candidate in an unusually heated race overshadowed by Mideast tensions.

The U.S. announcement this week that it's quitting UNESCO rocked the multi-day election and heightened concerns about the agency's funding and future direction.

Azoulay succeeds outgoing Director-General Irina Bokova of Bulgaria, whose eight-year term was marred by financial woes and criticism over Palestine's inclusion as a member. On Thursday, the U.S. and Israel said they plan to pull out of the Paris-based organization over its perceived anti-Israel bias.

UNESCO's general assembly will have to sign off next month on the executive board's leadership pick, but it's seen as a formality.

The new director will set priorities for the organization best known for its World Heritage program to protect cultural sites and traditions. The agency also works to improve education for girls, promote an understanding of the Holocaust's horrors, defend media freedom and coordinate science about climate change.

Azoulay won 30 to 28 in a final vote Friday against Qatar's Hamad bin Abdulaziz al-Kawari, also a former culture minister. Azoulay, a 45-year-old Jewish woman, had started the week's voting with much less support but built up backing as other candidates dropped out and won a runoff earlier Friday against Egypt's candidate.

The vote was a big blow to Arab states, who had long wanted to lead the U.N. Educational, Scientific and Cultural Organization. UNESCO has previously had European, Asian, African and American chiefs, but never an Arab one since the organization was founded in 1945 following World War II to promote world peace through culture.

The agency's inclusion of Palestine as a member state in 2011 complicated this push, as did Qatar's diplomatic dispute with Arab neighbors.

Azoulay will be the second French leader of the organization since Rene Maheu, UNESCO's director general from 1961-74. Azoulay's father is Moroccan and was an influential adviser to Moroccan kings, so she does have a connection to the Arab world.

"UNESCO is going through a profound crisis," Azoulay told journalists on Friday after making it to the final vote. "As a response to these difficulties, France has chosen not to leave but at the contrary to invest more ... because we believe in multilateralism. We believe in universal values."

Jewish groups took issue with al-Kawari's candidacy, citing a preface he wrote to a 2013 Arabic book called "Jerusalem in the Eyes of the Poets" that they claim is anti-Semitic. He wrote "We pray to God to liberate (Jerusalem) from captivity and we pray to God to give Muslims the honor of liberating it."

In March, the Simon Wiesenthal Centre wrote an open letter to German Ambassador Michael Worbs, chair of the UNESCO Executive Board, to criticize the organization for accepting al-Kawari's candidacy.

Azoulay's late entry into the leadership race in March annoyed many UNESCO member states who thought that since France hosts the Paris-based agency it shouldn't field a candidate. Arab intellectuals urged French President Emmanuel Macron to withdraw his support for her.

The voting process itself was highly politicized.

French media reported that Qatar recently invited several members of the UNESCO executive board on an all-expenses-paid trip to Doha. In addition, the vote came as Egypt and three other Arab nations continued a months-long boycott of Qatar over allegations that the government funds extremists and has overly warm ties to Iran.

Egypt's foreign ministry has demanded an inquiry into alleged "violations" during the UNESCO voting.

The next leader will have to allay fears over UNESCO's future as the agency faces a withdrawal from both the U.S. and Israel.

While the Trump administration had been preparing for a likely withdrawal from UNESCO for months, the timing of the State Department's statement Thursday was unexpected. Bokova expressed "profound regret" at the U.S. decision and defended UNESCO's reputation.

The U.S. stopped funding UNESCO after it voted to include Palestine as a member state in 2011, but the State Department has maintained a UNESCO office and sought to weigh in on policy behind the scenes. UNESCO says the U.S. now owes about $550 million in back payments.

Nikki Haley, U.S. ambassador to the United Nations, called UNESCO's July designation of Hebron's Old City and the Tomb of the Patriarchs as Palestinian territory the latest of many "foolish actions" that had made the agency "a chronic embarrassment."