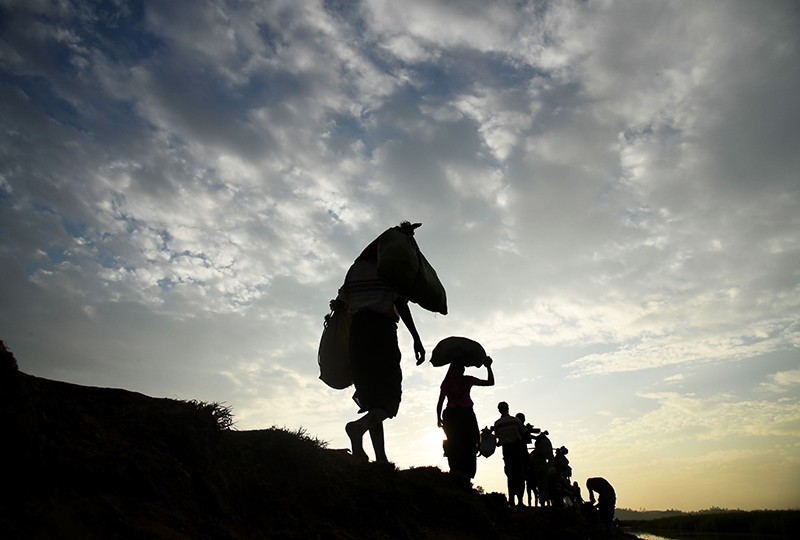 Rohingya Muslim refugees who were stranded after leaving persecution in Myanmar walk towards the Balukhali refugee camp after crossing the border, Ukhia district, Bangladesh, Nov. 2, 2017. (AFP Photo)
by Anadolu Agency
Nov 03, 2017 12:00 am

4,866 refugees died in 2017 so far, or 16 people a day, the International Organization for Migration (IOM) said Friday during a briefing in Geneva.

"Deaths in the Mediterranean Sea continue to account for a majority of the world's migrant fatalities — now up to 2,839 for the year, or nearly 60 percent of the 2017 total.

"Last year at this time the region recorded deaths of 4,150 migrants," the IOM said.

Cyprus has become a new pathway to continental Europe as the number of refugees entering other parts of Europe by sea in 2017 decreased, the IOM said.

Some 105 refugees used this route to reach the island in 2017 and 850 refugees in total arrived in Cyprus by boat, nearly three times 2016's total of 345 migrants, the IOM said.

Some 150,982 refugees entered Europe by the Mediterranean so far in 2017 compared with 335,158 refugee arrivals in Europe through the same period last year, data showed.

"This year may shape up as the first year since 2013 that Mediterranean sea crossings by migrants fell short of the 200,000 threshold.

Some 19,134 migrants have been rescued or intercepted in Libyan waters so far in 2017.