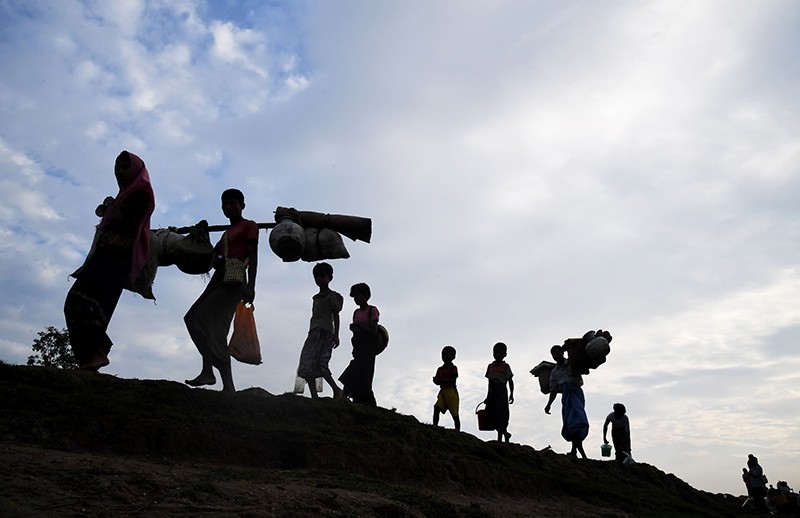 Rohingya refugees who had been stranded in the 'no-man's land' between Myanmar and Bangladesh walk into Palongkhali in Bangladesh's Ukhia district on November 2, 2017 (AFP Photo)
by Nov 03, 2017 12:00 am

At least three million people worldwide are stateless, most of them minorities, a status that deprives them of an identity, rights, and often jobs, the United Nations refugee agency said on Friday.

Muslim Rohingyas in Buddhist-majority Myanmar form the world's biggest stateless minority, with some 600,000 having fled violence and repression since late August and taken refuge in Bangladesh, it said.

In a report, "This is Our Home" - Stateless Minorities and their Search for Citizenship", the U.N. High Commissioner for Refugees (UNHCR) called on governments to end the discriminatory practice by 2024.

"If you live in this world without a nationality, you are without an identity, you are without documentation, without the rights and entitlements that we take for granted ... having a job, having education, knowing that your child belongs somewhere," Carol Batchelor, director of UNHCR's division of international protection, told a news briefing.

Governments should give nationality to people born on their territory if they would otherwise be stateless, and facilitate naturalization for longtime stateless residents, UNHCR says.

Other stateless groups -- many of whom have lived for generations in their homelands -- include the Karana of Madagascar, Roma in the former Yugoslav Republic of Macedonia, and the Pemba of Kenya, the report said.

"We can concretely say there are over 3 million identified stateless persons, but that would certainly not be the scope in totality," Batchelor said.

"We need to ensure that there is not a deliberate, arbitrary exclusion or deprivation of nationality."

Asked whether Rohingya fell into the category of those deliberately excluded and deprived of nationality, Batchelor said: "We can only look at the result ... Myanmar has a nationality law. It outlines categories of persons that are considered to be citizens of Myanmar. The Rohingya are not on that list."

Some 30,000 stateless people in Thailand have acquired nationality since 2012 and the Makonde, a community of 4,000, became Kenya's 43rd officially recognized tribe last year, the report said.

"We are seeing reductions in Thailand, in central Asia, in Russia, in Western Africa. But the numbers are not nearly as substantial as they would need to be for us to end statelessness by 2024," said Melanie Khanna, head of UNHCR's statelessness section.