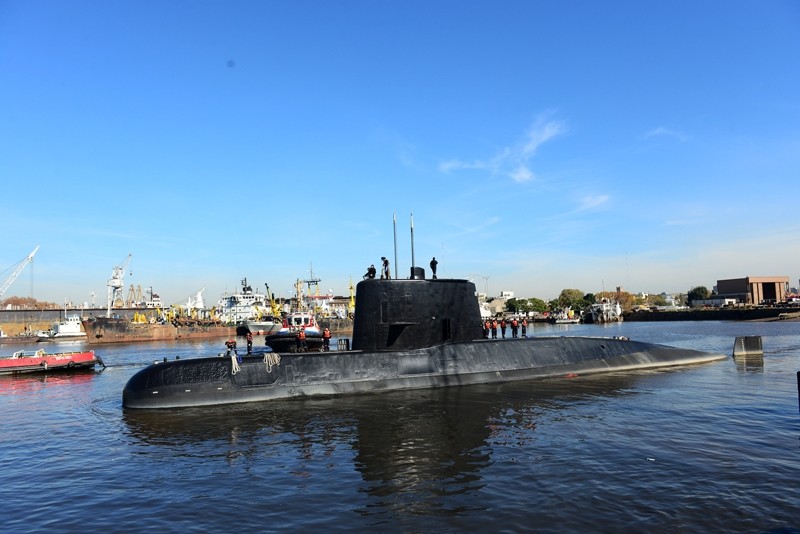 Hopes of finding survivors from a missing Argentine submarine with 44 crew members aboard have been revived after the navy said it had detected what could be distress calls.

There has been no contact with the ARA San Juan since early Wednesday, prompting Buenos Aires to launch an air and sea search with help from countries including Brazil, Britain, Chile, Uruguay and the United States.

The search has, however, been complicated by stormy conditions, Argentine navy spokesman Enrique Balbi said on Saturday.

However, the defense ministry said it had detected seven satellite-transmitted signals that may be an attempt by the submarine to resume contact.

The signals were received at 10:52 am (1352 GMT) and 3:42 pm (1842 GMT) on various naval bases with the help from US satellite communication experts, but they did not lock in, thus preventing a full connection.

"Right now, we are working to pinpoint the exact location of what is emitting the signals," presuming that it could be the missing sub, the ministry said.

Early Sunday, the US Southern Command said it was sending a second Navy P-8A Poseidon aircraft to join the search. The Florida-based plane and a crew of 21 are to reach Argentina later in the day.

The California-based Undersea Rescue Command earlier said it was deploying two underwater crafts designed to rescue trapped submarine sailors at different depths, as well as a remotely-operated underwater robot known as an ROV.

'Got to be afloat'

"We will do what is necessary to find the submarine as soon as possible," Argentine President Mauricio Macri wrote on Twitter.

All land communications bases along the coast were ordered to scan for any followup, as family members of the missing waited nervously in the coastal city of Mar del Plata.

Claudio Rodriguez, whose brother Hernan is aboard the submarine, was hopeful, saying the satellite signals suggested the vessel was still afloat and would be found.

"They've got to be afloat. Thank God," he said.

"That gives us hope, because we knew that if they were down below, they would be screwed," he told TN news from the western city of Mendoza.

The navy has not ruled out any hypothesis, a spokesman said. The most likely scenario given is that a power short may have unexpectedly cut off the vessel's communications.

Prayers from the pope

The San Juan is a TR-1700 class diesel-electric submarine which had been returning from a routine mission to Ushuaia near the southernmost tip of South America, to its base at Mar del Plata, some 400 kilometers (250 miles) south of Buenos Aires.

Among those on board is Argentina's first female submarine officer, 35-year-old weapons officer Eliana Krawczyk.

It is one of three submarines in the Argentine fleet.

Sixty-five meters (213 feet) long and seven meters (23 feet) wide, it was built by Germany's Thyssen Nordseewerke and launched in 1983.

At the Vatican, Argentine-born Pope Francis said he offered "his fervent prayer" for the safety of the submarine sailors.