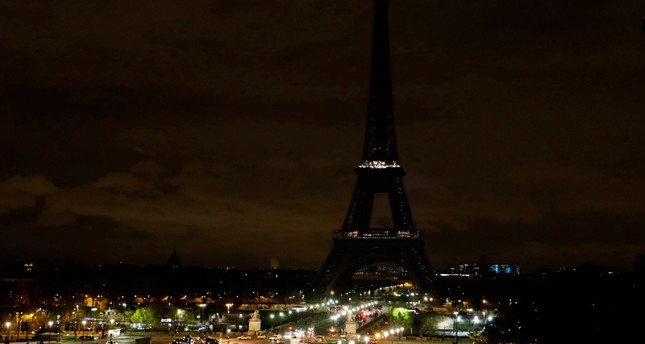 The lights of the Eiffel Tower in Paris are switched off on November 24, 2017 in tribute to the victims of the deadly attack on a mosque in Egypt's Sinai ( AFP Photo)
Related Articles

Friday's deadly attack targeting a mosque in Egypt's Sinai Peninsula, which left 305 people dead and another 130 injured, received significant condemnation from around the world, with landmarks and public buildings displaying the Egyptian flag or going dark to pay tribute to victims.

After detonating a bomb during Friday prayers, attackers opened fire on worshippers and then attempted to stop ambulances from accessing the area.

The Turkish Foreign Ministry strongly condemned the incident with a statement issued on its website.

"We strongly condemn the terrorist attack perpetrated today [Nov. 24] on a mosque located in the west of Al-Arish [northern Sinai], causing many casualties and wounded people," the statement said.

In a speech in Istanbul on Friday, Prime Minister Binali Yıldırım said: "235 innocent people were killed, there are hundreds of others injured. Is this Islam? Is this humanity?"

The death toll was later raised to 305 by Egyptian authorities.

Presidential Spokesperson Ibrahim Kalın on Friday described the incident as a "heinous attack".

"Turkey considers terrorism as a crime against humanity whatever its source and reason, and strongly expresses this view in its all international, regional and bilateral contacts," Kalın said in a statement.

Trump said that Washington stands by Egypt and backs its fight against terrorism, calling the incident "shocking," the statement read.

Also on Friday, Trump condemned the "horrible and cowardly terrorist attack on innocent and defenseless worshipers" over Twitter.

Macron told Sissi that France is in full support of the Egyptian government, saying, "Paris is willing to increase cooperation with Egypt in combatting terrorism which became a global threat."

Lights of Paris landmark Eiffel Tower were switched off at midnight in solidarity with Egypt to mourn the victims of the brutal attack targeting Friday prayers in al-Rawdah Mosque in the town of Bir al-Abd, located some 40 kilometers west of Sinai port city of Arish.

Mayor of Paris Anne Hidalgo said that turning off the lights at the famed Paris monument would send a message of solidarity from the French capital that has itself been the site of a spate of deadly terrorist attacks in recent years.

Russian President Vladimir Putin, for his part, offered his condolences to Sissi, according to a statement released by the Kremlin.

"We are once again convinced that terrorists are completely alien to the notion of human morality," Putin asserted.

In Israel, which borders the Sinai Peninsula, Tel Aviv's city hall was lit up with the Egyptian flag in homage to the victims of the deadly assault..

"A horrific attack in #Egypt. We send our condolences to our friends across the border and light the Municipality building in their honor," tweeted Mayor Ron Huldai.

U.K. Prime Minister Theresa May, meanwhile, tweeted: "Appalled by the sickening attack on a mosque in North Sinai. Condolences to all those in Egypt affected by this evil and cowardly act."

The U.K. Foreign Minister Boris Johnson said on Twitter, "Deeply saddened by the abhorrent attack on a mosque in North Sinai, #Egypt. My sincere condolences to all those affected by such a barbaric act."

In England's second largest city, The Library of Birmingham was lit up in the colors of Egypt's flag.

NATO Chief Jens Stoltenberg, also speaking via Twitter, said: "I condemn the barbaric terrorist attack on a mosque in North Sinai. My thoughts are with all those affected and the people of our partner, Egypt."

The Canadian Prime Minister, Justin Trudeau, issued a statement on the mosque attack in Egypt.

"I am shocked and horrified by today's terrorist attack in the al-Rawda mosque in Bir-Al-Abed, which killed and injured hundreds of worshippers.

"On behalf of all Canadians, Sophie and I offer our deepest condolences to the friends and families of the victims of today's attack. We hope for a complete and rapid recovery for all those injured," he added.

In Canada's largest city Toronto, the CN Tower was also lit in honor of the attack's victims.

The Canadian government tweeted a photo of the 553-meter (1,815 feet) structure bathed in the colors of the Egyptian flag.

Qatari Sheikh Tamim bin Hamad Al Thani expressed his "strong condemnation" of the attack, according to the press agency QNA. "We express our condolences to the families of the victims and to the Egyptian people, and we wish the injured a speedy recovery," he said in the message to Sisi.

Kuwait also expressed its condolences to the "Egyptian President Abdel Fattah al-Sisi, his people, his government over "the heinous attack."

According to the official Saudi News Agency, Saudi King Salman bin Abdulaziz offered condolences over the phone. He said his country stands by Egypt by all means.

For its part, the Bahraini Foreign Ministry confirmed Bahrain's solidarity with Egypt, saying, "We strongly condemn this terror crime which contradicts the principles of Islam and other religions, and humanity," according to a statement released by the ministry.

Oman and Yemen were also part of the countries that expressed condolences to Egypt.

Condemning the attack, Tunisia called on the international community to set up anti-terror mechanisms in fighting terrorism affectively.

The Head of the Presidential Council of the Libyan Government of National Accord, Fayez al-Sarraj expressed condolences to the Egyptian government and people about the attack in a written statement.

Sudan and Jordan also denounced the attack, and confirmed their firm stand by the Egyptian people in fighting terrorism.

The Gaza-based Palestinian resistance movement Hamas also condemned the deadly bombing, which occurred not far from Egypt's border with the Gaza Strip.

"Hamas condemns in the strongest terms the criminal bombing targeting worshipers at Al-Rawda Mosque in Sinai's Bir al-Abd region," the group said, going on to extend its condolences to the friends and families of the victims.

Hamas also called upon "God Almighty to protect Egypt -- and all Muslim countries -- from misfortune and provide them with safety and stability".