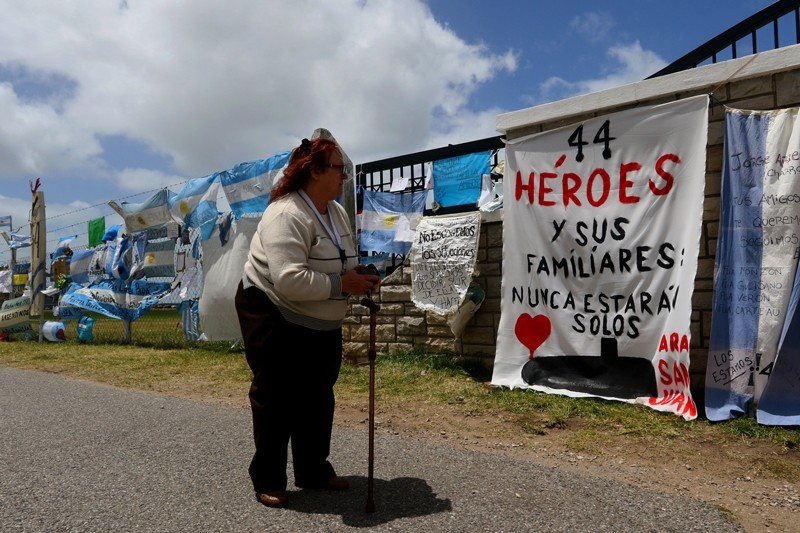 Argentina's navy said Thursday that it is no longer looking for survivors among the 44 sailors aboard a submarine missing for 15 days, though a multinational operation will continue searching for the vessel.

Hopes of finding survivors had already dimmed because experts said the crew had only enough oxygen to last 7 to 10 days if the sub remained intact under the sea. The navy also had said an explosion was detected near the time and place where the ARA San Juan made its last contact with shore Nov. 15.

Navy spokesman Enrique Balbi said the rescue mission had "extended for more than twice what is estimated for a rescue."

"We've had 28 ships, nine aircraft, 4,000 people involved, 18 countries supporting," he told reporters. "Despite the magnitude of these efforts, we've been unable to find the submarine."

Balbi said the search was no longer considered a rescue mission, but the hunt would go on for the missing sub.

Some relatives of the crew broke into tears after they received the news.

The navy has said the vessel's captain reported that water entered the snorkel and caused one of the submarine's batteries to short circuit. The captain later communicated by satellite phone that the problem had been contained.

Some hours later, an explosion was detected near the time and place where the San Juan was last heard from. A navy spokesman said this week that the blast could have been triggered by a "concentration of hydrogen" caused by the battery problem reported by the captain.

The search for the San Juan has employed some of the latest technology in one of the largest efforts of its kind. So far, aircraft have flown some 557,000 nautical miles, while ships have searched more than a million nautical miles in the frigid South Atlantic, the navy said.

A Norwegian ship carrying the U.S. Navy's underwater remotely operated vehicle and its pressurized rescue module was returning to the Patagonian port of Comodoro Rivadavia to resupply before setting out again to search for the sub. The U.S. Navy also said Thursday that its Cable-operated Unmanned Recovery Vehicle 21 had been deployed to join the search efforts after Argentina shifted its focus to undersea assets capable of deep seafloor searches.

Some family members have denounced the navy's response to the sub's disappearance as well as the age and condition of the vessel. President Mauricio Macri has promised a full investigation.

The San Juan, a German-built diesel-electric TR-1700 class submarine, was commissioned in the 1980s and was most recently refitted in 2014.

During the $12 million retrofitting, the vessel was cut in half and had its engines and batteries replaced. Experts say refits can be difficult because they involve integrating systems produced by different manufacturers, and even the tiniest mistake during the cutting phase can put the safety of the ship and crew at risk.

At the sub's home naval base in Mar del Plata, relatives were hit hard by Thursday's announcement. Some hugged and fell on their knees sobbing near a fence crowded with blue-and-white Argentine flags, rosary beads and messages of support. Others took to social media to pay homage to their loved ones.

"I stay with this image," Jesica Gopar, said in a tweet that included a photo of her husband, submarine officer Fernando Santilli, smiling and holding their young son in his arms.

"He's the most beautiful being that God could have put on my path 13 years ago," she wrote. "He's a hero who must be recognized along with his 43 other crew members. I hope you didn't suffer my love."