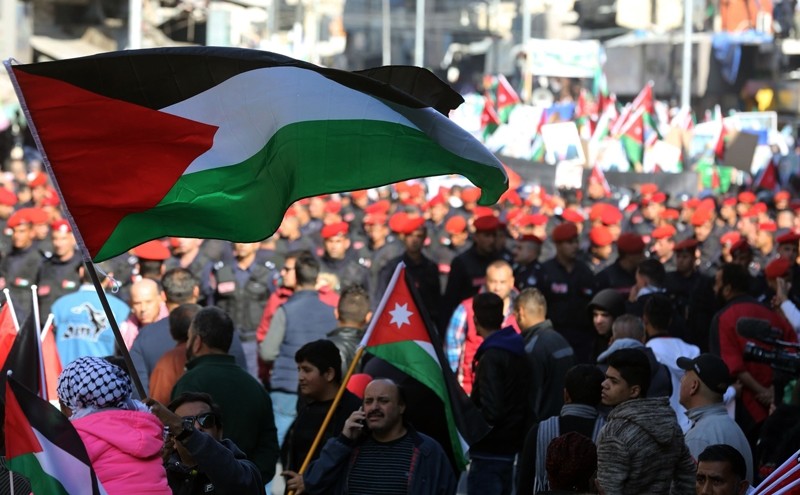 A Jordanian protester waves a Palestinian flag as another carries a Jordanian national flag during a demonstration against the US president's decision to recognise Jerusalem as the capital of Israel ( AFP Photo)
by Anadolu Agency Dec 15, 2017 12:00 am

Some marchers raised banners reading "The [1917] Balfour Declaration may have succeeded, but the Trump Declaration will fail!"

Palestine was seized by Britain following the collapse of the Ottoman Empire early last century, after which Arthur James Balfour, Britain's then foreign minister, gifted it to the "Jewish people".

Last Wednesday, Trump announced his decision to recognize Jerusalem as Israel's capital, and move the U.S. Embassy from Tel Aviv to the holy city. The dramatic shift in U.S. policy drew a storm of condemnation and protest across the Arab and Muslim world.

At a Tuesday summit in Istanbul, the Organization of Islamic Cooperation responded to the controversial U.S. move by formally recognizing East Jerusalem as the capital of Palestine.

In April, Russia recognized West Jerusalem as Israel's capital, voicing hope that the city's eastern half might eventually serve as the capital of an independent Palestinian state.

Trump, in his announcement last week, said that the "specific boundaries of Israeli sovereignty in Jerusalem" should be decided in final-status talks between the two sides.