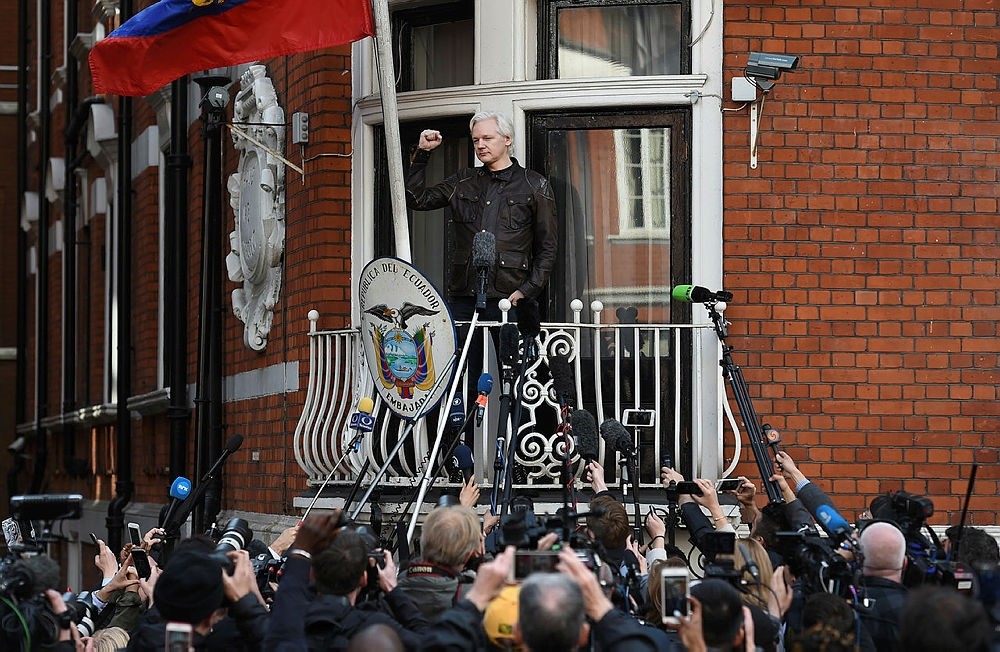 Ecuador has granted citizenship to WikiLeaks founder Julian Assange after more than five years of living in asylum at the nation's embassy in London, officials announced Thursday.

Foreign Minister Maria Fernanda Espinosa said officials accepted Assange's request for naturalization in December, and they continue to look for a long-term resolution to a situation that has vexed officials since 2012.

"What naturalization does is provide the asylum seeker another layer of protection," Espinosa said.

Ecuador gave Assange asylum after he sought refuge in the embassy to avoid extradition to Sweden for investigation of sex-related claims. Sweden dropped the case, but Assange has remained in the embassy because he is still subject to arrest in Britain for jumping bail. He also fears a possible U.S. extradition request based on his leaking of classified State Department documents.

The Australian-born Assange posted a photograph of himself wearing a yellow Ecuadorean national soccer team jersey on Instagram Wednesday and his name now appears in the Andean country's national registry.

The new citizenship status, however, appears to change little for Assange in the immediate future. He would still need to alert British authorities of any movement outside the embassy.

Espinosa said Ecuador is trying to make Assange a member of its diplomatic team, which would grant him additional rights under the Vienna Convention on Diplomatic Relations, including special legal immunity and safe passage.

Britain's Foreign Office said earlier Thursday it has rejected Ecuador's request to grant him diplomatic status in the U.K.

"Ecuador knows that the way to resolve this issue is for Julian Assange to leave the embassy to face justice," the office said.

Though protected by Ecuador, the relationship between Assange and nation's leaders has at times been dicey. Ecuador has repeatedly urged Assange not to interfere in the affairs of other countries following his frequent online comments on international issues.

The biggest crisis came in October 2016, when the embassy cut his internet service after WikiLeaks published a trove of emails from then-U.S. presidential candidate Hillary Clinton's campaign.

He was also a point of contention in Ecuador's 2017 presidential election. Conservative candidate Guillermo Lasso pledged to evict the Australian within 30 days of taking office, while current President Lenin Moreno said he would allow him to stay. Assange later taunted after Lasso's loss that he would "cordially invite Lasso to leave Ecuador within 30 days."

Moreno issued a warning reminding Assange not to meddle in politics. He has also called Assange a hacker.