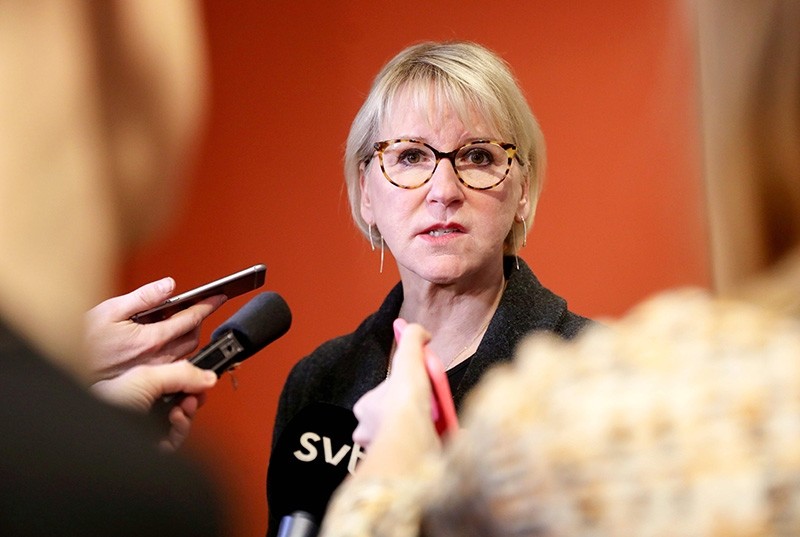 Sweden's Foreign Minister Margot Wallstrom talks to journalists, on March 16, 2018 in the Swedish house of parliment in Stockholm, to comment her meeting with the North Korean Foreign Minister the day before. (AFP Photo)
by Associated Press Mar 17, 2018 12:00 am

Sweden's foreign minister concluded three days of talks Saturday with her North Korean counterpart, saying they discussed the "opportunities and challenges for continued diplomatic efforts to reach a peaceful solution" to the Koreas' security dispute.

"The main focus for the talks was the security situation on the Korean Peninsula," Wallstrom said. The pair met Saturday at the Foreign Ministry in Stockholm as scores of reporters waited outside in sub-zero temperatures.

"In addition, the humanitarian situation in North Korea was discussed, sanctions and regional cooperation and security issues for, for example, South Korea, Japan, Russia, China and the United States," she added, without elaborating.

Ri, who has not made any public comments in Sweden, also briefly met with Swedish Prime Minister Stefan Lofven on Friday.

Sweden has had diplomatic relations with North Korea since 1973 and is one of few Western countries with an embassy in Pyongyang. It provides consular services for the United States in North Korea.

The Scandinavian country has been rumored as a possible site for the U.S.-North Korea summit, though a truce village on the South Korean side of the Demilitarized Zone between the Koreas is seen as more likely.

Trump has agreed to meet Kim by May. So far, North Korea has yet to comment publicly on what it hopes to gain from the talks.

Senior South Korean officials who traveled to the North Korean capital of Pyongyang this month and met with Kim say he is willing to discuss the North's nuclear weapons program.

That could suggest a potential breakthrough, or a fallback to the North's longstanding position that it's willing to get rid of its nuclear weapons if the U.S. guarantees its safety.

In the past, that has meant Washington would have to withdraw all of its troops from South Korea, a condition no U.S. president has been willing to consider.

On Friday, Ri also visited the Stockholm International Peace Research Institute for an off-the-record meeting on the situation in the Korean Peninsula and northeast Asia. The independent agency listed North Korea as having 10 to 20 warheads including "operational warheads held in storage and retired warheads awaiting dismantlement."

Finland's STT news agency said North Korean representatives will be conducting negotiations tomorrow at the Japanese Embassy in Helsinki, adding no American officials would be involved in the low-level meeting.