At least 12.5M Muslims died in wars in past 25 years, expert says 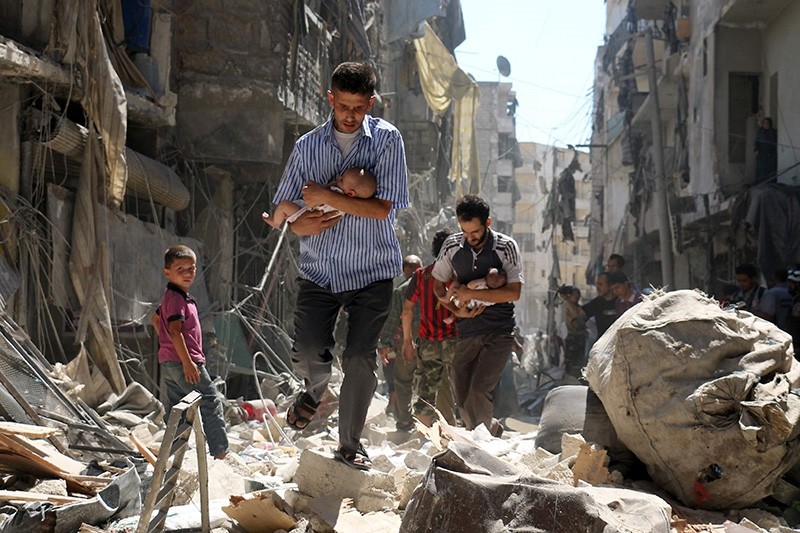 Syrian men carrying babies make their way through the rubble of destroyed buildings following a reported air strike on the oppositionl-held Salihin neighbourhood of the northern city of Aleppo (AFP File Photo)
by Anadolu Agency
Apr 21, 2018 12:00 am

Some 12.5 million Muslims have been killed in wars during the last 25 years, a Turkish scholar said Saturday.

Speaking at a conference in Istanbul, Refik Turan, head of the Turkish Historical Society, said that throughout history humans have fought and war is an inevitable fact of life.

"Usually war is between two states, but there are wars within the country as well. The results of a war cannot be predicted. Wars are a fact of our lives," he said at the "World Wars, Turkey and Syria on Unending Struggles for Power" conference.

"According to a recent research, the number of Muslims who died in the conflict and wars in the world in the last 25 years have reached 12.5 million. This almost amounts to the losses in a World War."

Turan also said that the U.S., Russia, and Iran do not want peace in Syria, and the result is evident.

"Turkey addresses 80 percent [of problems] in Syria. No one has this sort of potential. After the terrorists are cleared from Manbij, a ray [of hope] will light up all of Syria."

Since then, hundreds of thousands of people have been killed in the conflict, according to the U.N.