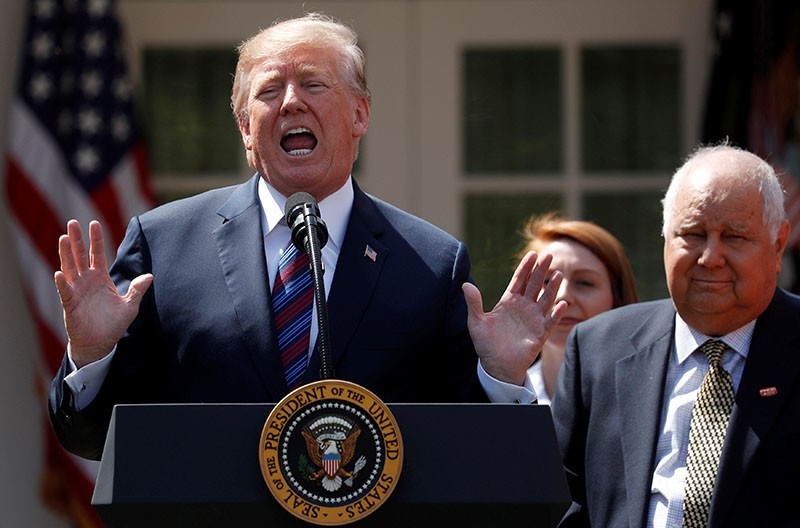 U.S. President Donald Trump will announce on Tuesday whether he will pull out of the Iran nuclear deal or stay in and work with European allies who say it has successfully halted Iran's nuclear ambitions.

Trump has consistently threatened to pull out of the 2015 agreement because it does not address Iran's ballistic missile program or its role in wars in Syria and Yemen, and does not permanently prevent Tehran from developing nuclear weapons.

A senior U.S. official close to the process said France, Germany and Britain had moved significantly to address Trump's concerns over the ballistic missile program, the terms under which international inspectors visit suspect Iranian sites, and "sunset" clauses under which some terms of the deal expire.

But it was not clear whether those last-ditch efforts had made enough progress to persuade Trump to stay in the pact.

"The big question in my mind is does he think the Europeans have moved far enough so that we can all be unified and announce a deal?" the official told Reuters.

European leaders have warned that a U.S. withdrawal would undo years of work that led to and sustained a landmark deal that has kept nuclear weapons out of Iran's hands.

French President Emmanuel Macron made a phone call with Trump to try to change the president's mind one last time.

Trump told Macron that the U.S. will withdraw from the deal, the New York Times reported.

However, the French presidency denied the NYT report and said the U.S. president did not any indication on Iran deal during the phone call.

The Iran deal, negotiated during the administration of Trump's Democratic predecessor, Barack Obama, eased economic sanctions on Iran in exchange for Tehran limiting its nuclear program.

But Trump has called it the "worst deal ever negotiated" and he wants Britain, France and Germany - which also signed the pact along with Russia and China - to toughen up the terms.

In the past few weeks, the Republican president has consulted either in person or by telephone with leaders of all three countries.

British Foreign Secretary Boris Johnson made the rounds in Washington on Monday, including talks with Vice President Mike Pence and Secretary of State Mike Pompeo.

Still, European diplomats privately said they expected Trump to withdraw from the agreement.

Two White House officials and a source familiar with the debate inside the administration said last week that Trump had all but decided to pull out.

Under the deal, known as the Joint Comprehensive Plan of Action (JCPOA), the United States committed to ease a series of U.S. sanctions on Iran and it has done so under a string of "waivers" that effectively suspend them.

Trump has until Saturday to decide whether to extend the waivers or withdraw and reintroduce sanctions related to Iran's central bank and Iranian oil exports.

That would dissuade foreign companies from doing business with Iran because they could be subject to U.S. penalties.

Iran has said it will not renegotiate the accord and threatened to retaliate if the United States pulls out, although it has not said how.

Diplomats and military experts say Tehran could seek to resume its nuclear arms program or step up its military involvement in Iraq, Syria, Yemen and Lebanon.

Iranian President Hassan Rouhani suggested on Monday that Iran might remain in the nuclear deal even if Trump abandons it and imposes sanctions.

But he also warned that Tehran would fiercely resist U.S. efforts to limit its influence in the Middle East.

Financial markets are also watching Trump's decision closely. On Monday, oil prices broke above $70 a barrel to their highest level since late 2014.