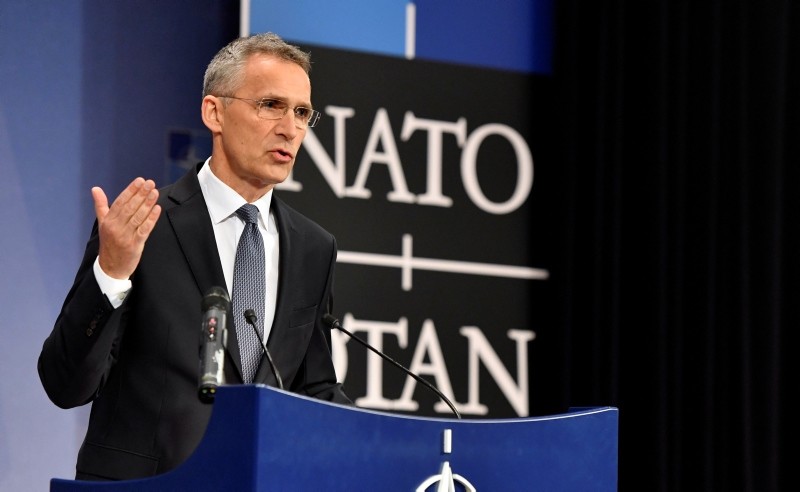 NATO defense ministers are expected to approve new measures aimed at improving the alliance's ability to respond to new threats, notably from Russia, at two-day talks starting Thursday in Brussels.

NATO has been ramping up its defense abilities in recent years in response to perceived aggression from Russia, following the country's invasion of Ukraine's Crimean peninsula in 2014 and its support for separatists in eastern Ukraine.

Ministers are set to approve a new initiative, dubbed the "Four Thirties," which would enable NATO to mobilize 30 land battalions, 30 air squadrons and 30 combat vessels within 30 days. It would comprise around 30,000 troops, 300 aircraft and at least 30 navy vessels or submarines.

The ministers are also likely to announce a strengthening of maritime operations, particularly in the Mediterranean Sea, where Russian ships have been shadowing allied vessels.

The meeting is expected to make official staffing levels of more than 1,200 personnel for new commands covering the Atlantic Ocean — based in Norfolk, Virginia — and in Ulm, Germany, handling logistics during any conflict on mainland Europe.

"These will be key to move our troops across the Atlantic and within Europe without delay whenever needed, to ensure that we have the right forces in the right place at the right time," NATO Secretary-General Jens Stoltenberg told reporters Wednesday.

In Finland, which is not a NATO member, the Finnish military said U.S. Joint Chiefs of Staff Chairman Gen. Joseph Dunford would meet Friday with his Russian counterpart Gen. Valery Gerasimov "on the initiative of both countries." In April, NATO's top military officer met with Gerasimov in the first such encounter since relations between Moscow and the alliance sank to post-Cold War lows over Russia's annexation in 2014 of Ukraine's Crimean Peninsula.

The defense ministers' meeting comes just five weeks before a summit of NATO leaders, to be attended by U.S. President Donald Trump.

A year ago, Trump embarrassed U.S. allies outside their new billion-euro headquarters by publicly berating them for failing to spend enough on their defense budgets.

Over the past year he has pulled the U.S. out of the Paris climate change agreement and a deal limiting Iran's ability to develop nuclear weapons. At great expense, European allies are trying to keep that deal afloat. Then on June 1, he slapped tariffs on steel and aluminum imports from Europe and Canada, citing national security concerns.

Stoltenberg says the U.S. is investing more on European defense than ever recently, but even he concedes the importance of keeping a lid on tensions.

"The reality is that when it comes to NATO, the trans-Atlantic bond has been strengthened," Stoltenberg said, but he added: "We are part of a broader picture, and in the long run it will also benefit NATO and defense cooperation if we are able to address, solve, those other disputes."

On his way to Brussels on Wednesday, U.S. Defense Secretary Jim Mattis said that he does not expect the trade rift to damage military ties.

The tariffs issue is a delicate one for Mattis, who has placed great emphasis on nurturing and strengthening relations with allies, particularly in NATO, where he has pushed member countries to spend more on their own defense and to help combat Islamic extremists.

Asked whether he thinks the Trump tariffs will hurt security ties with NATO partners, including Canada, Mattis said: "Right now I don't see that."

"And I think it's still premature to call it a trade war," he said.

The issue of "burden-sharing" — NATO parlance for spending enough and making the right military contributions — will also be on the table Thursday. NATO is expected to announce that, by the July 11-12 summit, eight members will be spending the target of 2 percent of GDP on military budgets.

Just over half the allies — 15 of them — have provided action plans laying out how they will close in on that benchmark by 2024. Germany lags in defense spending and is likely to face more criticism.