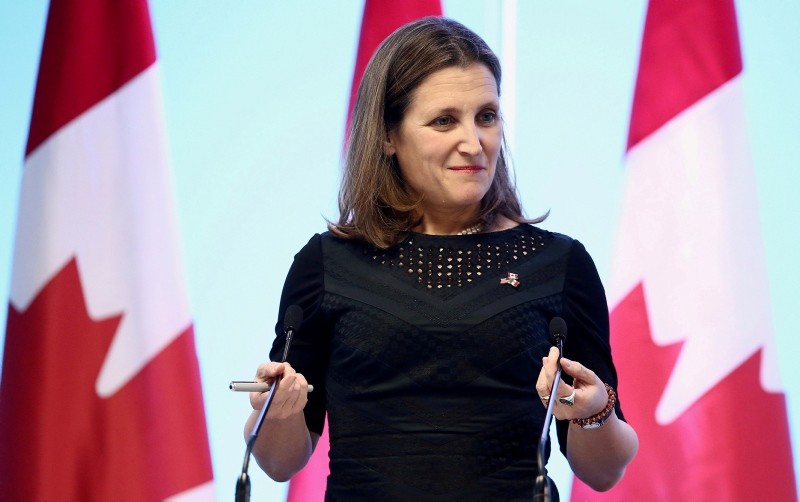 Canadian Foreign Minister Chrystia Freeland gestures during a joint news conference on the closing of the seventh round of NAFTA talks in Mexico City, Mexico, March 5, 2018. (REUTERS Photo)
by Compiled from Wire Services Aug 06, 2018 12:00 am

"Let me be very clear with everyone here and with the Canadians who may be watching and listening: Canada will always stand up for human rights, in Canada and around the world, and women's rights are human rights," she told an audience in Vancouver.

The rupture, which underscores a newly aggressive foreign policy led by Crown Prince Mohammed bin Salman, comes after Canada denounced a new crackdown on women and human rights campaigners in the kingdom.

"The kingdom announces that it is recalling its ambassador to Canada for consultation. We consider the Canadian ambassador to the kingdom persona non grata," the Saudi foreign ministry announced on Twitter.

The ministry also announced "the freezing of all new trade and investment transactions with Canada while retaining its right to take further action".

Foreign Minister Adel al-Jubeir said Saudi Arabia "refuses all interference in its affairs and will deal with any interference decisively", dismissing Canada's position as "built on misleading information", in a statement carried by the official Al Ekhbariya TV.

"We urge the Saudi authorities to immediately release them and all other peaceful #humanrights activists," the Canadian foreign ministry said Friday.