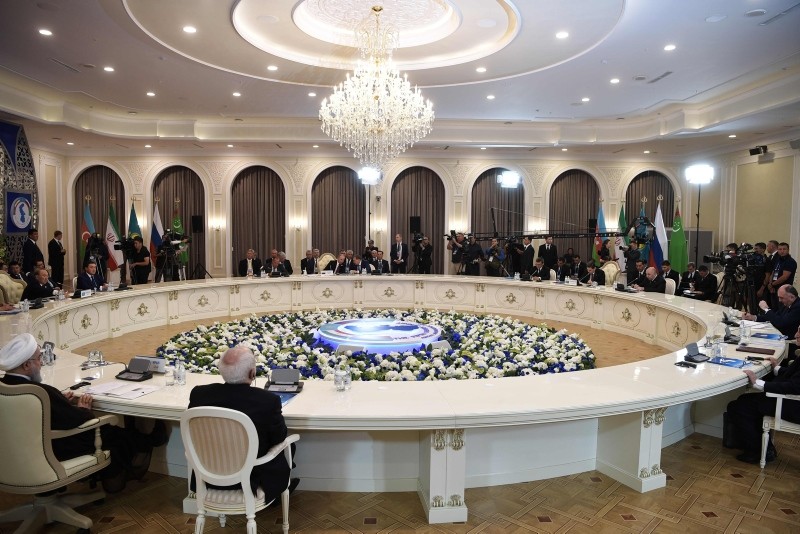 Heads of the Caspian region countries take part in a plenary session during the 5th Caspian Summit in Aktau on August 12, 2018. (Photo by Alexey Nikolsky / Sputnik / AFP)
by Compiled from Wire Services Aug 12, 2018 12:00 am

Iran and four ex-Soviet nations, including Russia, Iran, Kazakhstan, Turkmenistan and Azerbaijan, agreed in principle on Sunday how to divide up the potentially huge oil and gas resources of the Caspian Sea, paving way for more energy exploration and pipeline projects.

The host, Kazakh President Nursultan Nazarbayev said before the signing that the leaders were "participants in a historic event."

"We can admit that consensus on the status of the sea was hard to reach and not immediate, the talks lasted more than 20 years and called for a lot of joint efforts from the parties," Nazarbayev said.

Russian leader Vladimir Putin, whose country was seen as driving the deal, said the convention had "epoch-making significance" and called for more military cooperation between the countries on the Caspian.

Sunday's summit was the fifth of its kind since 2002 but there have been more than 50 lower-level meetings since the Soviet breakup spawned four new countries on the shores of the Caspian.

The deal goes some way to settling a long-lasting dispute on whether the Caspian - the world's biggest enclosed body of water - is a sea or a lake, which means it falls under different international laws.

While the convention refers to the Caspian as a sea, provisions in the agreement give it "a special legal status", Russian deputy foreign minister Grigory Karasin told Kommersant daily earlier this week.

The Kremlin has said the convention keeps most of the sea in shared use but divides up the seabed and underground resources.

Iran, who ended up with the smallest share of the sea under the terms of the convention, is viewed as a potential loser in the deal.

Iranian President Hassan Rouhani called the convention "a major document" Sunday but noted that it does not bring an end to all disagreements over the sea.

"Today we have a framework for actions in the Caspian Sea which was not the case before," Rouhani said in comments translated into English.

"But there are other issues to deal with in other meetings."

Nevertheless, Rouhani hailed a stipulation in the convention that prevents non-Caspian countries from deploying military forces on the sea.

"The Caspian Sea only belongs to the Caspian states," he said. 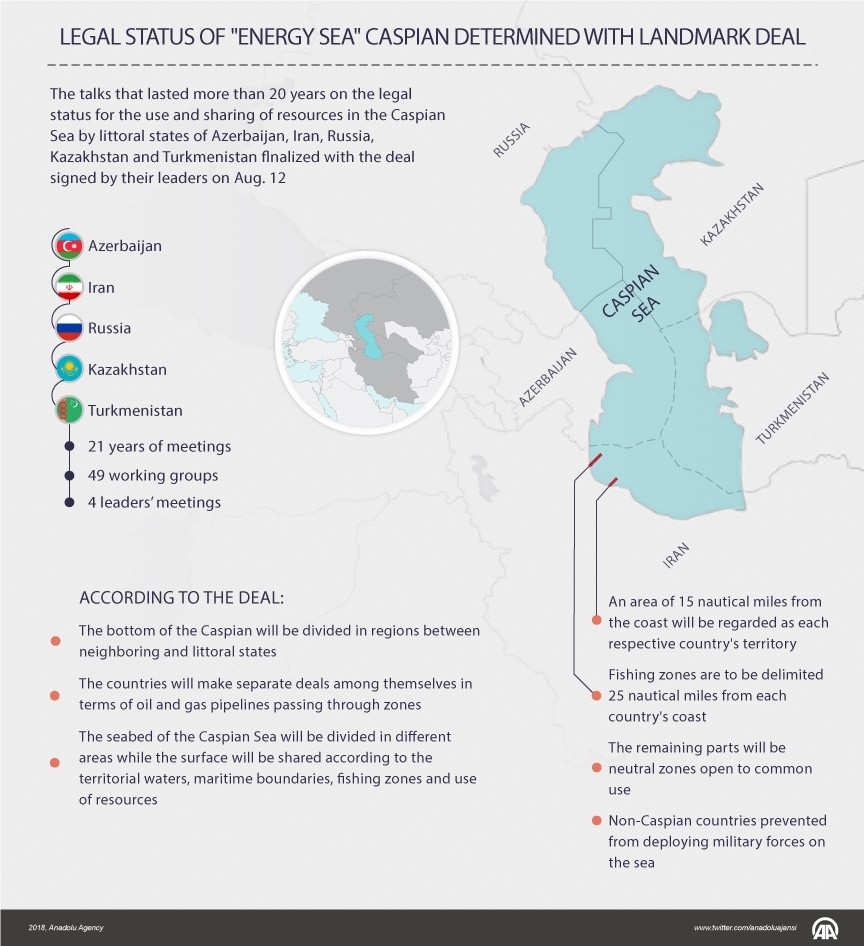 According to the agreement, an area of 15 nautical miles from the coast will be regarded as each respective country's territory.

Fishing zones are to be delimited 25 nautical miles from each country's coast. The remaining parts will be neutral zones open to common use.

The agreement also included the principles of preservation of a military balance, the protection of biological resources and navigation safety.

It will imply equal rights for all littoral states.

The delimitation of the seabed - which has caused most disputes - will require additional agreements between littoral nations, Rouhani said.

And while some countries have pressed ahead with large offshore projects such as the Kashagan oil field off Kazakhstan's coast, disagreement over the sea's legal status has prevented some other ideas from being implemented.

One of those is a pipeline across the Caspian which could ship natural gas from Turkmenistan to Azerbaijan and then further to Europe, allowing it to compete with Russia in the Western markets.

Some littoral states have also disputed the ownership of several oil and gas fields, which delayed their development.

The dispute began with the fall of the Soviet Union which had had a clearly defined Caspian border with Iran. In negotiations with post-Soviet nations, Tehran has insisted on either splitting the sea into five equal parts or jointly developing all of its resources.

None of its neighbors have agreed to those proposals and three of them - Russia, Kazakhstan and Azerbaijan - effectively split the northern Caspian between each other using median lines.

Azerbaijan, however, has yet to agree on how to divide several oil and gas fields with Iran and Turkmenistan, including the Kapaz/Serdar field with reserves of some 620 million barrels of oil.

The three countries have tried to develop the disputed fields while at times using warships to scare off contractors hired by other sides. As a result, none of the disputed projects has made much progress.

Speaking after the signing on Sunday, all five leaders praised it as historic event, but provided little detail about provisions on splitting the seabed.

However, making it clear that the document is no final solution, Rouhani said border delimitation would require further work and separate agreements, although the convention would serve as a basis for that.

Moscow has no outstanding territorial disputes but has objected, citing environmental concerns, to the construction of a natural gas pipeline between Turkmenistan and Azerbaijan which would allow Turkmen gas to bypass Russia on its way to Europe.

It remained unclear whether the convention adopted on Sunday would definitely clear a way for the pipeline. Kazakh President Nursultan Nazarbayev said the document allowed pipelines to be laid as long as certain environmental standards were met.

Ashley Sherman, principal Caspian analyst at energy consultancy Wood Mackenzie, told Reuters that although the signing itself was "an unprecedented milestone" for the region, the immediate implications for the energy sector would be limited.

"We consider a Trans-Caspian Gas Pipeline (TCGP) unlikely, even in the longer term", he said in an email. "Clarity on the legal status will shine more light on the commercial and strategic obstacles to a TCGP, from infrastructure constraints to supply competition, not least from Azerbaijan itself."

In the upstream sector, the increasing intent for joint projects in the south Caspian is very promising, Sherman said.

"Stranded fields and frozen exploration projects may well come back on the agenda," he said.

However, with offshore Caspian oil and gas production already almost at 2 million barrels of oil equivalent per day, the impact from new fields - if and when disputes about their ownership are settled - might be limited.

"The scale of the projects in disputed waters is not comparable to the existing super-giant fields, from Azeri Chirag Guneshli and Shah Deniz in Azerbaijan to Kashagan in Kazakhstan," Sherman said.