Trump steps back on declassification order of Russia documents 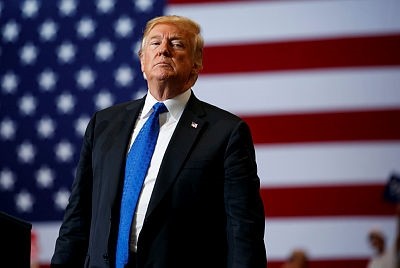 Trump said he made the decision after the Justice Department informed him that releasing the unredacted documents "may have a perceived negative impact" on Special Counsel Robert Mueller's ongoing investigation, and after "key Allies' called to ask not to release."

"Therefore, the Inspector General.........has been asked to review these documents on an expedited basis," he said in a series of tweets.

"I believe he will move quickly on this (and hopefully other things which he is looking at). In the end I can always declassify if it proves necessary. Speed is very important to me - and everyone!" he added.

Trump ordered on Monday the declassification of troves of documents related to the start of the FBI's Russia probe.

Trump and his closest aides have long sought to discredit Mueller's probe, which the president and his allies call a "witch hunt" as it seeks to determine whether the Trump campaign colluded with what U.S. intelligence concluded was a wide-ranging "influence campaign" aimed at swaying the 2016 campaign in Trump's favor.

Ohr was in touch with former British spy Christopher Steele, who penned a salacious memo about Trump and Russia. Ohr's wife was part of the research firm that commissioned the Steele dossier.