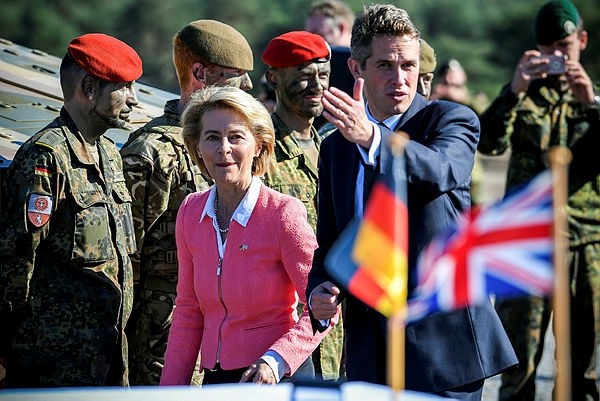 "Although we are preparing to leave the EU, our commitment to European security is resolute," Williamson said, adding that the new statement "strengthens U.K.-German ties and bolsters the defense of two key NATO partners."

"This is an alliance we both hold dear," he added.

Williamson also attended a demonstration from U.K. and German personnel who form part of the combined river-crossing capability in the town of Minden-a capability vital to NATO operations, according to the statement.

The visit came after the announcement that the British Army will be permanently based in the country beyond 2020-a date after which the U.K. is set to no longer be an EU member.

Williamson also joined a meeting of NATO defense ministers in Brussels, in which he "stood shoulder-to-shoulder with allies in condemnation of reckless and indiscriminate Russian cyber-attacks."

Britain claimed Thursday that the Russian military intelligence agency GRU was behind cyber-attacks across the globe, hours before the Dutch government said it expelled four Russian intelligence officers from the country over their involvement in a thwarted hack of the Organization for the Prohibition of Chemical Weapons.

At the meeting, the U.K. defense secretary discussed the "importance of the alliance being ready to respond not only to the threats from the East but also from the South."

He announced that the British Army would be deepening cooperation with partners, which will lead to "overseas military capacity-building," and "NATO's emerging defense capacity-building initiatives."

Williamson also attended NATO's Nuclear Planning Group (NPG), "consulting with counterparts to ensure the alliance has the necessary tools and procedures in place to respond to a nuclear crisis."