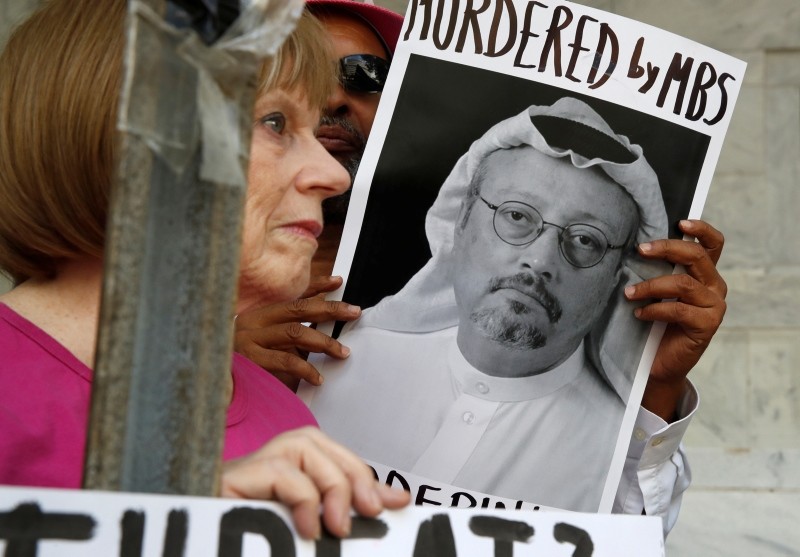 In this Oct. 10, 2018, file photo, people hold signs during a protest at the Embassy of Saudi Arabia about the disappearance of Saudi journalist Jamal Khashoggi, in Washington. (AP Photo)
by Daily Sabah with Agencies
Oct 14, 2018 12:00 am

Britain, France and Germany insisted Sunday that "light must be shed" on the whereabouts of journalist Jamal Khashoggi as they called for a credible investigation into his disappearance.

In a joint statement, Britain's foreign minister Jeremy Hunt, his French counterpart Jean-Yves Le Drian and Germany's Heiko Maas said whoever was responsible for the Saudi journalist's disappearance must be held to account.

Khashoggi, a Washington Post contributor, vanished after entering the Saudi consulate in Istanbul on October 2 to obtain official documents for his upcoming marriage.

"Light must be shed on the disappearance of Saudi journalist Jamal Khashoggi," it said, indicating all three countries were treating the matter "with the utmost seriousness."

"There needs to be a credible investigation to establish the truth about what happened, and — if relevant — to identify those bearing responsibility for the disappearance of Jamal Khashoggi, and ensure that they are held to account," foreign ministers from the three countries said in a joint statement.

While expressing support for joint Saudi-Turkish efforts to look into his disappearance, they said the Saudi government must provide "a complete and detailed response", indicating that such a message had been conveyed "directly" to Riyadh.

The initial assessment of the Turkish police was that Khashoggi had been deliberately killed inside the consulate. Riyadh has dismissed the claims.

Following the statement, Hunt spoke to media at the foreign secretary's Chevening country residence, and challenged Riyadh to explain what happened to Khashoggi.

"The country that can help us get to the bottom of this is Saudi Arabia," he said.

"If, as they say, this terrible murder didn't happen then where is Jamal Khashoggi? That is what the world wants to know.

"If they have got nothing to hide then they will, and should, co-operate."

Saudi Arabia warned Sunday it would retaliate against any sanctions imposed on the oil-rich kingdom over Khashoggi's disappearance, as the Riyadh stock market plunged on growing investor jitters.

The Saudi delegation, which arrived in Turkey on Thursday, is meeting a Turkish prosecutor investigating the case as well as representatives from the Justice Ministry, Interior Ministry, police and the national intelligence agency, one source said.

On Tuesday, the Turkish foreign ministry said the Saudi consulate in Istanbul would be searched as part of the investigation.

Speaking on the matter Saturday, Foreign Minister Mevlüt Çavuşoğlu called on Riyadh to cooperate and allow Turkish prosecutors and experts to enter the consulate.