EU looks to boost Asian ties as US pursues protectionism 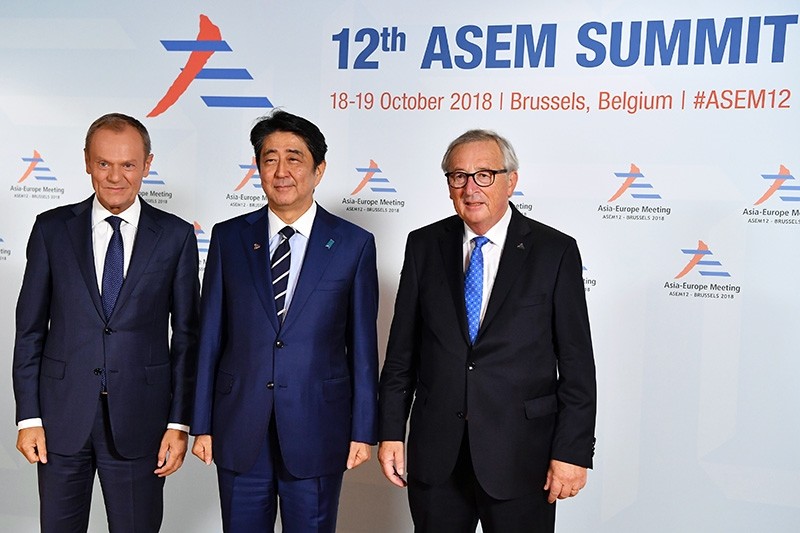 European leaders sought to build support from Asia Thursday in defense of free trade and the fight against climate change, to counter the growing protectionism of President Donald Trump's America.

Amid bitter tariff disputes with Washington, the leaders are expected to use the two days of talks to give their backing to the global trading system based on the World Trade Organisation (WTO).

"To those who prefer quick fixes without clear rules I say it's not worth it. A world without rules is by definition a world of chaos," EU Council President Donald Tusk said as he opened the summit.

EU diplomatic chief Federica Mogherini insisted as she arrived that it was not an "anti-Trump" meeting, before enumerating most of the current areas of difference between Europe and the United States.

"We don't organize meetings against anyone," she said.

After a gala dinner on Thursday evening, the leaders head into talks on Friday, while Singapore and Vietnam are expected to sign trade deals with the EU on the sidelines of the event.

Korean detente will also be on the agenda, with senior EU officials to hold talks with Moon, who earlier this week said world powers need to reassure the North Korean leader Kim Jong Un that he had taken the right decision in committing to scrap his nuclear weapons program.

The EU will also seek to shore up support for the beleaguered Iran nuclear deal, which suffered a hammer blow when the U.S. pulled out earlier this year and reimposed sanctions on Iran -- despite the desperate pleas of European allies.

Brussels is seeking to beef up its role in international diplomacy, answering a call by European Commission chief Jean-Claude Juncker for the EU to develop a more muscular foreign policy to match its economic clout.

The leaders will discuss the EU's new "Asia connectivity strategy", which aims to improve transport, digital and energy links between the two continents while promoting environmental and labor standards.

Brussels insists the scheme is not a response to any other player, but many observers see it as a direct riposte to Beijing's vast "Belt and Road" trade infrastructure project.

The summit comes amid renewed tensions between the U.S. and EU, a day after top American officials slammed the bloc for stalling trade talks, putting a transatlantic trade truce under pressure.

After a trade war looked to be brewing over metals tariffs, Trump and Juncker pledged in June to hold off from further tit-for-tat measures and to work towards scrapping customs duties on all goods.

The deal was hailed as a breakthrough but on Wednesday US Commerce Secretary Wilbur Ross hit out at EU officials.

Asked if EU-Asian cooperation was particularly important in the context of the current trade disputes, Malaysia's Deputy Prime Minister Wan Azizah Wan Ismail said: "Of course -- that's the reason why we should come closer together."

Washington is also locked in a trade war with China, rolling out billions of dollars in tariffs in a bid to reduce its trade deficit and to rein in what the US says are unacceptable Chinese commercial practices.

Ahead of the summit, Zhang Jun, the Chinese assistant minister of foreign affairs, said there was consensus between Europe and Asia on the need to protect multilateralism.

"Especially in protecting the international order of trade organizations that abide by international norms and laws," Zhang said.

"This is the focus of cooperation between Asia and Europe, as well as China and Europe."

But any European desire to build a united front with Asian powers will be tempered by grave concerns about numerous human rights issues in countries across Asia.

The EU has warned Cambodia and Myanmar that they could face losing preferential trading privileges with the bloc over election irregularities and the Rohingya crisis, respectively.

In addition to numerous long-standing rights complaints about China, the EU added its voice last week to a chorus of condemnation of the decision to expel a leading British journalist from Hong Kong.