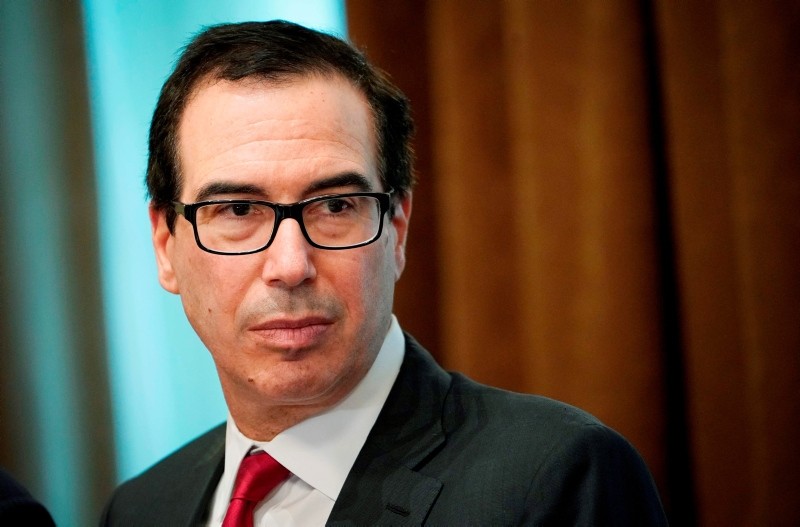 U.S. Treasury Secretary Steven Mnuchin watches as U.S. President Donald Trump speaks during a meeting with Republican members of Congress and Cabinet members at the White House in Washington, DC. (AFP Photo)
by Compiled from Wire Services Oct 23, 2018 12:00 am

The U.S. Treasury Department on Tuesday imposed sanctions targeting the Taliban and have designated nine individuals associated with the group including two linked to Iran's Islamic Revolutionary Guard (IRGC).

The individuals, which include two Pakistanis and four Afghanis, were identified as global terrorists by the Treasury Department, an action that allows the U.S. government to freeze property or interest in property under American jurisdiction.

Treasury Secretary Steven Mnuchin said that the United States and six other Middle East countries are taking action to expose and disrupt terrorist activities being conducted by the Taliban and Iran to undermine the government of Afghanistan.

The sanctions target Taliban members, who are involved in suicide attacks and other lethal activities, as well as Iranians who provide material and financial support, Treasury said in a statement.

"Iran's provision of military training, financing, and weapons to the Taliban is yet another example of Tehran's blatant regional meddling and support for terrorism. The United States and our partners will not tolerate the Iranian regime exploiting Afghanistan to further their destabilizing behavior.

The new sanctions follow a spate of violence in Afghanistan that preceded the country's parliamentary elections last week.

On Thursday, U.S. Army Brigadier General Jeffrey Smiley, was confirmed as one of two Americans wounded an attack that killed the police chief of the southern Afghan province of Kandahar.

The attack, which was claimed by the Taliban, was a devastating blow to the government, decapitating the security command of one of Afghanistan's most strategically important provinces and demonstrating the insurgents' ability to strike even top leaders.