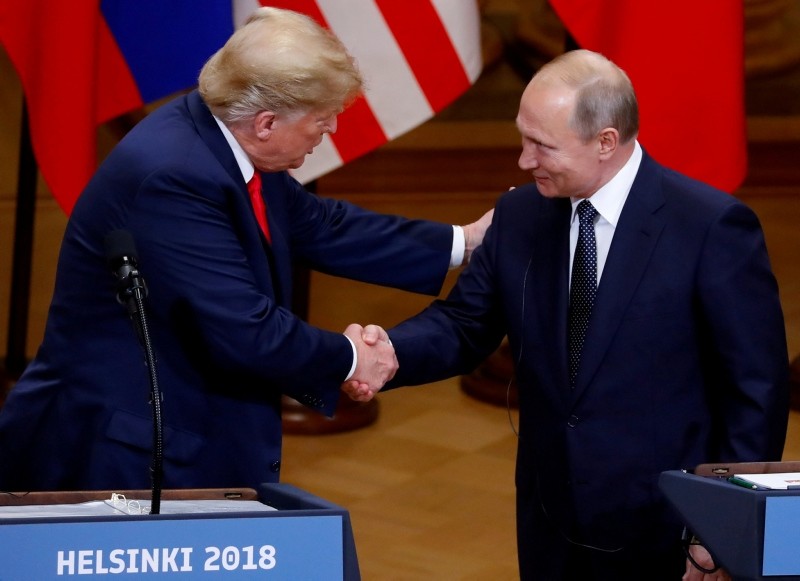 US President Donald Trump, left, and Russian President Vladimir Putin shake hands as they hold a joint news conference after their meeting in Helsinki, Finland, July 16, 2018. (Reuters Photo)
by Oct 24, 2018 12:00 am

The Kremlin said Wednesday it was ready to discuss the possibility of a summit in Washington next year between Russian President Vladimir Putin and U.S. counterpart Donald Trump.

He confirmed that the issue has been "raised" but that "so far there is no concrete decision on this."

The Kremlin is preparing for a "possible meeting" between the two leaders at an event in Paris on Nov. 11 commemorating the centenary of the end of World War I, Peskov said.

Bolton arrived in Moscow on Sunday evening and held talks with Putin and other Russian officials. He said at a press conference that Trump wished to meet Putin at the World War I commemorations.

The U.S. official told Interfax in an interview published Wednesday that Washington expected the two leaders to discuss in Paris a possible summit in Washington next year, after which Trump could visit Moscow.

Bolton's visit came just after Trump announced that the U.S. would pull out of a Cold War-era nuclear weapons treaty.

Asked whether the Kremlin wanted to continue discussions with the U.S. on the treaty, Peskov said that "as far as we understand the American side has taken the decision and is formalizing in the near future the process of withdrawing from this treaty."