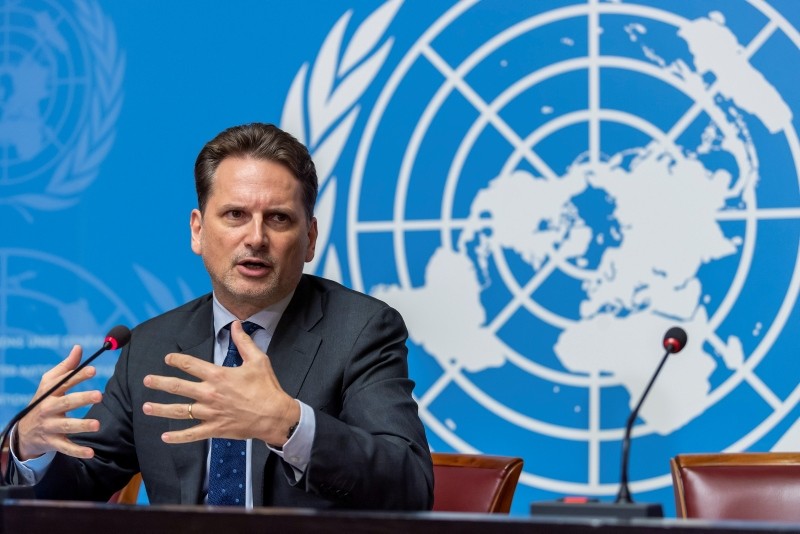 Pierre Kraehenbuehl, UNRWA Commissioner-General, speaks about the UNRWA work, achievements and challenges in 2018 and beyond, during a press conference, at the European headquarters of the UN in Geneva, Switzerland, Nov. 15, 2018. (EPA Photo)
by Nov 15, 2018 12:00 am

The organization, known as UNRWA, had counted on a budget of $1.2 billion (1 billion euros) for 2018 but faced a gap of $446 million when the Trump administration announced it was cutting support.

UNRWA responded to its "unprecedented" financial pressures by seeking support across U.N. member-states and raised an additional $382 million, bringing the shortfall for the year down to just $64 million, Kraehenbuehl told reporters in Geneva.

He said he hoped the gap could still be trimmed further in the coming weeks.

"I'll be very honest in saying, I don't think many people believed that we would be able to overcome a $446 million shortfall at the beginning of the year," said Kraehenbuehl, who took charge of UNRWA in 2014.

He credited the European Union and especially four Gulf countries with increasing support.

Kuwait, Qatar, Saudi Arabia and the United Arab Emirates upped their support to $50 million each to offset Trump's cuts, the UNRWA chief said.

The agency's 2019 budget has not been finalized, but Kraehenbuehl stressed it was important "to preserve those new levels of funding".

The United States had previously been UNRWA's largest contributor.

But the Trump administration, as well as Israel, say they oppose the way the organization operates and how it calculates the number of Palestinian refugees.

UNRWA was set up in 1950 to help Palestinian refugees who lost their homes because of the 1948 Middle East conflict. Its assistance includes schools, healthcare centers and food distribution.

More than 750,000 Palestinians fled or were expelled during the 1948 war surrounding Israel's creation.

They and all their descendants are deemed by the U.N. agency to be refugees who fall under its remit.