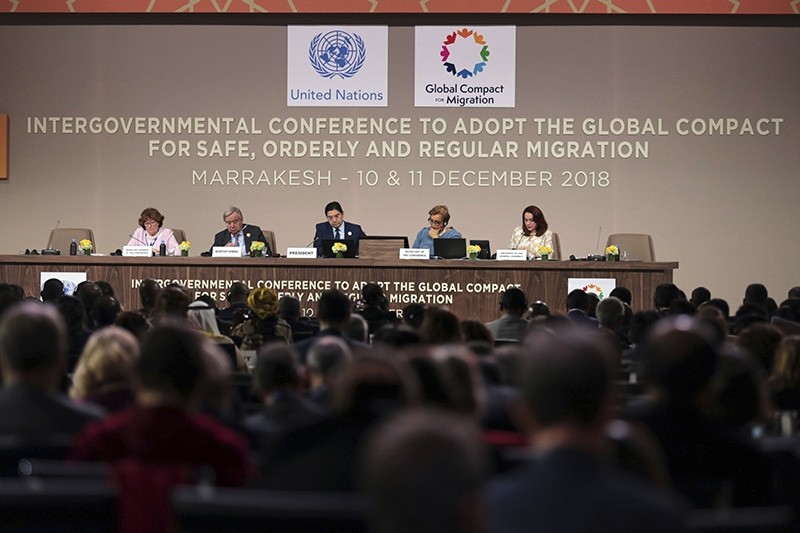 More than 160 countries adopted on Monday a non-binding U.N. global pact that seeks to ensure the safe, orderly and humane movement of people around the world, over the outspoken disapproval of the United States and several other countries.

The Global Compact for Safe, Orderly and Regular Migration -- finalized at the U.N. in July after 18 months of talks -- was formally approved in Marrakesh at the start of a two-day conference.

High-level government delegates including German Chancellor Angela Merkel gave their backing to the U.N.'s Global Compact for Migration approved by acclamation by 164 countries, culminating years of efforts supported by U.S. President Barack Obama but rejected by the Trump administration.

Billed as the first international document on managing migration, it lays out 23 objectives to open up legal migration and discourage illegal border crossings, as the number of people on the move globally has surged to more than 250 million.

Describing it as a "roadmap to prevent suffering and chaos," U.N. Secretary-General Antonio Guterres sought to dispel what he called a number of myths around the pact, including claims that it will allow the U.N. to impose migration policies on member states.

The pact "is not legally binding," he said. "It is a framework for international co-operation... that specifically reaffirms the principle of state sovereignty.

"We must not succumb to fear and false narratives", he added.

The United States on Friday had hit out at the pact, labeling it "an effort by the United Nations to advance global governance at the expense of the sovereign right of states."

The U.S. was the first government to disavow the negotiations late last year, and since then Australia, Austria, the Czech Republic, Dominican Republic, Hungary, Latvia, Poland and Slovakia have pulled out of the process.

Rows over the accord have erupted in several European Union nations, hobbling Belgium's coalition government and pushing Slovakia's foreign minister to tender his resignation.

From the United States to Europe and beyond, right-wing and populist leaders have taken increasingly draconian measures to shut out migrants in recent years.

U.S. President Donald Trump has pledged to build a wall on the US-Mexico border and has focused his recent ire on a migrant caravan from Central America, while a populist coalition government in Italy has clamped down on boats rescuing migrants at sea.

Belgium's liberal premier Charles Michel won the support of parliament and is in Morocco to back the accord, but was left leading a minority government on Sunday after the Flemish nationalist party said it will quit his coalition over the pact.

Belgium is among a group of seven nations described by the U.N.'s special representative for migration Louise Arbour as still "engaged in further internal deliberations" over the accord.

While welcoming the U.N.'s attempts to manage migration, activists argue that the pact does not go far enough to secure migrants' rights.

"It is very aspirational in many areas, with limited implementation commitments," said Amnesty International's senior advocate for the Americas, Perseo Quiroz, in comments emailed to AFP.

The agreement's non-binding status and the inclusion of several specific clauses on sovereignty "makes its implementation solely based on the goodwill of states supporting it," he added.

After the Marrakesh conference, the U.N. General Assembly is set to adopt a resolution formally endorsing the deal on Dec. 19.